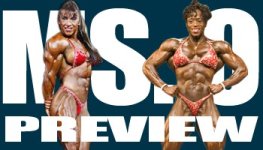 Take this to the bank: Fitness Olympia will crown a new champion this year. But we're not happy about it. Not because we won't enjoy seeing one of this year's 14 competitors flip, tumble and rumble her way to the the top; it's because two-time and reigning Fitness Olympia champ Adela Garcia was forced to withdraw from this year's event with a torn anterior cruciate ligament. We hope to see Garcia back next year, when she will be gunning for history, more specifically Susie Curry, as she attempts to tie Curry's record of four Fitness Olympia wins.

That said, the show must go on. And what a show it is turning out to be, as five of the remaining top-six finishers return from last year. The lineup was injected with a shot of energy - and sarcasm, as you will see below - when larger-than-life performer and 2006 Fitness O winner Jen Hendershott decided to postpone her retirement ... again ... and come back for her ninth straight Olympia. Hendershott, who placed third last year, enters this year's event as one of the favorites.

Joining Hendershott as one of the odds-on favorites to take home her first Fitness Olympia title is Kim Scheideler (formerly Klein). Scheideler has finished as the runner-up in Vegas for the last three years, and judging by her win at the Fitness International in March, she could be primed to take the next step.

After spending a season as gladiator Stealth on NBC's American Gladiators, Tanji Johnson should be more prepared than ever for the rumble at the Orleans. Johnson had a breakout year in 2006, when she finished fourth, and matched the feat at last year's event. The always entertaining Tracey Greenwood, with eight pro wins on her resume, has been on a tear of late. No one in recent memory has been hotter, as Greenwood, who has finished in the top five in Vegas for five straight years, has won the last three professional fitness contests - the Houston Pro, the Europa Super Show and the Atlantic City Pro.

Add the always dangerous Julie Palmer and Julie Lohre to the mix and the battle for a top-six spot will be as competitive as ever.