Are you Testosterone Deficient!

If you are a bodybuilder and want to achieve anything with your physique than you simply cannot be testosterone deficient. You will get nowhere with bodybuilding being deficient with your levels of testosterone.

Here is a picture of Phil Heath for bodybuilding motivation before you read the article. 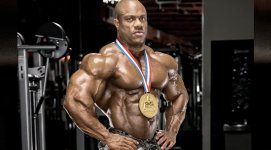 The symptoms of testosterone deficiency should be looked for by a man that is at an age where the levels of this hormone tends to diminish. It has been shown for most men that testosterone levels peak at age forty, but by fifty these levels will decline very rapidly. At what level should supplementation be considered? Or, does a doctor determine it by associated symptoms?

First, let's talk symptoms. When discussing these symptoms, we are only considering adult men, who had normal levels that led to normal development overall from the time of puberty. Adult men can experience depression among other mood disorders. It may be a good idea to have testosterone levels tested if experiencing depression, especially before deciding to go on the commonly prescribed medications such as Wellbutrin etc.

Muscle weakness is another symptom that may go unnoticed especially if a man doesn't work out on a regular basis. If a man never works out, then this could also lead to the muscle weakness just being blamed on a lack of training and exercise. There is evidence that a lack of exercise can bring about the deficiency. So, for the couch potato, the gym fly and everyone in between, muscle weakness is very relative and can easily escape the attention of a guy who might be testosterone deficient.

Diminished libido and erectile dysfunction can also be signs that a man has a deficiency of testosterone. So, maybe before running out to get a prescription for the this specific symptom, a testosterone level test may be a better first option. A loss of body hair is the last symptom that should be mentioned in this article.

Now let's talk about how doctor test for proper levels of testosterone and what those levels should be. A blood test is the standard method used to check levels, although urine and saliva will also work. It is usually preferred that this blood be drawn in the morning. In a couple days, depending on the lab, the results will be returned. Here is the part that is difficult to grasp. Normal levels have such a wide range, that even though a 14 year old is supposed to have a very high level, a 40 year old at peak, and a 50 year old a diminished level...it could be considered normal in all three males at 500 ng/dL. This result would actually be normal for a 60 year old.

I wish this article could be more informative, but when it comes to determining what is a low level, a normal level, or a high level, a doctor will probably use a combination of the results of these tests, and what the patient reports as symptoms that he might be experiencing to diagnose that testosterone levels are too low. Some doctors cut it off at 400 ng/dL, but others will not consider the level too low until it is at 200 ng/dL. It is known that to have the levels necessary to see and feel the effects of testosterone on strength and muscle, supplementing may be required to raise these levels to 800 ng/dL.