Sandesh Deshmukh is a youth from Pimpri Chinchwad city, adjacent to Pune, who has successfully built his career as a bodybuilder. He belongs to a simple middle-class family. Sandesh wanted to do something big in life from childhood, and bodybuilding helped him achieve those goals. But the journey has been quite challenging for the boy.

A resident of Shahunagar locality, Sandesh Deshmukh’s father, is a worker and his mother is a homemaker. Sandesh finished his schooling in Modern High School and got his B.E. Mechanical degree from Siddhant College of Engineering. During his college days, Sandesh decided to give a Mechanical muscular lift to his body and march ahead to take bodybuilding as his career.
Initially, Sandesh dreamt of becoming a cricketer. But during one match, he saw the transparency being killed and nepotism galore. So he decided not to become a cricketer and focused on bodybuilding. It was one of the best decisions in his life. But to become a bodybuilder, Sandesh Deshmukh had to train and follow a particular diet physically. All of this required money which was not fitting in his family’s budget. But the youth didn’t give up on his dream. He started working part-time as a delivery boy, bouncer, and gym trainer to raise money to meet the expenses for his bodybuilding.

Sandesh Deshmukh would work hard and also dedicate an equal amount of time to bodybuilding. His hard work finally paid off in January 2020 when he won a Gold medal in a bodybuilding competition and was honoured with Pune Shree. His parents couldn’t be more proud of him. A few months later, Sandesh also won the junior Maharashtra Shree bodybuilding competition at Kolhapur. The Pimpri Chinchwad Municipal Corporation (PCMC) declared Sandesh as their Brand Ambassador for “Fit PCMC”. Sandesh wishes to win the Mr Asia competition that is going to be held in the year 2022.
Sandesh achieved all these big feats only because of his passion and commitment. He didn’t give up and faced every challenge that came in his way towards his dreams. 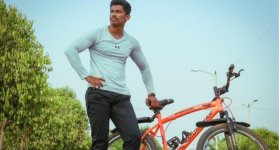