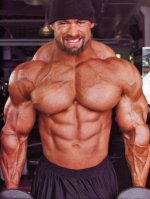 Branch Warren is a MuscleTech –sponsored athlete who was born in Tyler, Texas. He currently trains with Johnnie Jackson at the Metroflex Gym in Arlington, Texas. When he is not training, Warren spends time with his beautiful wife, Trish, an IFBB professional fitness competitor, and their daughter, Faith Lea. He keeps busy managing his own gym as well as his freight company.

Although he qualified for the 2011 Mr. Olympia championship, he was unable to compete due to a torn quadriceps tendon. He has won the Arnold Classic twice, once in 2011 and again in 2012. It has been rumored that his tear has healed and he is expected to compete once again in the 2014 Arnold Classic.
Past Competitions
Branch Warren first competed in 1992 when he won the Amateur Athletic Union (AAU) Teenage Mr. America competition. Branch’s first National Physique Committee (NPC) event was the Teenage Nationals, where he won again.
His first IFBB event was at the 2004 Night of Champions competitions, where he placed 8th. Branch’s first Mr. Olympia was in 2005, where he placed 8th. The following year, in 2006, Branch competed in his first Arnold Classic for a 2nd place finish.
While slipping to 7th place in 2007, Branch improved to 4th place in 2008 and 3rd in 2009, while winning the title of "Most Muscular". Branch placed 12th in his 2nd Mr. Olympia contest in 2006. He also placed 1st at the 2007 New York Pro. After not competing in the Olympia in 2007 and 2008, Branch returned to shock the bodybuilding world by placing 2nd at the 2009 Olympia, one spot ahead of 2008 Olympia winner Dexter Jackson, and losing only to three time winner Jay Cutler.
As the first competitor to walk out on stage in pre-judging, Warren set the bar high with his unmatched conditioning and overwhelming amount of muscle mass. Had Cutler not been in perhaps his best form to date, Warren would have walked away with the 2010 Olympia title!
Who is the “real” Branch Warren?
Below is an excerpt from a recent interview.
INTERVIEWER: Who and what is the real Branch Warren like as a person away from the bodybuilder?
Branch: Some people think I am very shy. I'm not shy at all, I'm just very quiet. My wife would probably be better at answering this but I would have to say I am focused, extremely intense and a hard worker. When I'm not working I like to go fishing and camping, and very seldom do me and my wife ever talk about bodybuilding.

INTERVIEWER: Although you aren't the typical "bad boy" bodybuilder, you have that "bad @ss biker" image that has attracted a rapid fan base increase that has made you become one of the most popular bodybuilders in the world. You may not own a bike but you do have a pair of the biggest wheels in the world.

INTERVIEWER: You beat Jay for the Junior National title when you were just 18 years old. Why is it that Jay's body grew so quickly in his early years following this show while your body is making its vast improvements a little later?

Branch: I think it could be because sometime after that show I took a break and I had other commitments to attend to, and on top of that I have suffered some injuries, but now that I have the stability in my life to be a full time Pro bodybuilder I am able to make my leaps and bounds.

INTERVIEWER: I have been fortunate enough to shoot your training in the habitat of Brian Dobson's Metro flex gym, in which I have never witnessed such intensity since watching one of Dorian Yates' workouts within the confines of his own Dungeon - Temple gym. Do you fear that these ferocious workouts will result in the magnitude of injuries "The Shadow" endured or possibly the amount Sandow trophies he collected?

Branch: I hope the latter. I have had my fair share of injuries in the past that I think is a direct result of my training style but I actually feel better now than I ever have. I am more conscious now to do everything I can to keep injuries to a minimum, for instance I will have weekly chiropractic care and muscle activation technique manipulation on a regular basis. I warm-up rigorously and always stretch out.

INTERVIEWER: Many writers and fans have made a comment that they haven't seen the grainy appearance you display since Yates's retirement. Is this because you have similar training, dieting patterns or is it because you are willing to go the extra mile with your contest work ethic where others stop short?

Branch: I think it's all of the above. I haven't really spoken to Dorian but from what I have read about him and witnessed from his training video we both train similar and push ourselves 100% at 100% of the time and this is probably a major contributing factor to why I display the grainy condition like Dorian.

INTERVIEWER: In the past you have told me that Australia was quite similar to Texas and if you were to live anywhere else, Oz would be it. Is there a strong possibility that you will make the move?

Branch: I have no immediate plans to move. I have recently bought a very nice house here in Texas and all of my friends and family are here, but in the future, if we want to try living in another part of the world for a while, Australia will definitely be the place.

INTERVIEWER: Is there a particular psyching up process you go through prior to you entering the gym and how long before does it begin?

Branch: I drink a cup of strong coffee on the way to Metro Flex gym while listening to some crazy heavy metal music and thinking about what I want to look like next time I stand on stage. It's a 20 minute drive to the gym so by the time I get there I'm ready to go to war.

INTERVIEWER: Do you write down your training progression?

Branch: No I don't. My training regime is constantly changing so I don't log anything down.

INTERVIEWER: Besides working as a private trainer, what do you do in your spare time?

Branch: I have my own gym, my wife and I have a freight company that delivers throughout the world which takes up a big chunk of our time.

INTERVIEWER: What is the strangest thing you have done in the past in an attempt to put on size?

Branch: When I was a teenager I wanted to get big so bad that I took someone's advice and ate every piece of junk I could find - pizza, burgers, ice cream you name it. It was immediately after a show, I went from 185Ib to 220Ib in the space of a week and as a result I felt absolutely miserable. I quickly came to my senses and stopped eating for an entire day and went to the gym to do some cardio before getting into a realistic routine.

INTERVIEWER: I understand you are promoting your own show next July - The Branch Warren GASP Classic? Could you tell me a little about that - and how should people should reach you if they would like to take part in that show?

Branch: It's on July 12th in Houston Texas. It's called the Branch Warren bodybuilding, fitness and figure extravaganza. There will also be a powerlifting competition and cash prizes. For more information you can call Brian Dobson of Metro Flex gym who is co-promoting the show with me on (817) 465 9331
Visit the Branch Warren GASP Classic in Texas on Saturday, July 12, 2014, or fill out a form at http://thebranchwarren.com/branchwarrenclassic and join the competition!

Great article, I liked it!

As for Branch Warren, I was a fan oh his up to the 2009 Mr.Olympia. After that he went on a downhill imo. I used to enjoy his training videos as well, for the intensity mainly, not that I train with that form, and I wish him the best in the future. Having said that, I don't think we will see him in the top 3 again, especially now when the lineups are stronger and stronger.
Similar threads