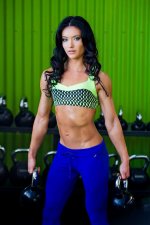 Bunbury’s latest television game show star has been revealed, with bodybuilding babe and fitness coach Jassy Chia about to take on the small screen.


The local professional fitness model is featuring in a promotional video for Channel 9’s upcoming season of Australian Ninja Warrior.


Chia, a bodybuilder, award-winning polercise competitor and owner of Iron Maiden Fitness, will take part in the brand new show in a bid to win the title of Australia’s first Ninja Warrior.


The sports entertainment competition pits professional athletes against each other by competing in extremely difficult obstacle courses, and stems from the successful American Ninja Warrior program.

Chia continues to keep herself busy with her passions for weight lifting and modelling, and her own personal training business as well as being the single mother of two children.


She will take on the ultimate athletic test on television, later this year when the show airs.


Stay tuned to see Chia put Bunbury on the map