Chris Bumstead knows that just like every other sport, bodybuilding requires years of workouts and consistency to achieve an amazing body and win competitions. If you're a fan of bodybuilding, you must be aware of all the risks involved and why some people consider it a dangerous sport. If you are a member of the best bodybuilding forum than you know how dangerous bodybuilding can be.

Despite this, there are some brave men and women alike that have chosen to walk a dreadful path to achieve success. Among these people, we have Chris Bumstead.

Chris Bumstead is many things, but he has found a way to relate them all to his passion, bodybuilding. He is a professional bodybuilder, fitness model, and social media influencer. He's quite popular on the internet, with over 4 million followers on Instagram and 1.2 million subscribers on his YouTube channel.

Do you want to know more about this young and successful bodybuilder? Not to worry, in this article, you'll find a handful of information about his career, personal life, and more importantly, his net worth.

On February 2nd, 1995, Chris Bumstead, a Canadian bodybuilder popularly known as CBum, was born into the family of Jeff and Mary Bumstead in Ottawa, Ontario, Canada.

He was born into an enlightened and educated family so he was exposed to many realities early in life. His father was a Chief Information Officer {CIO} in Kingston, Ontario while his mother worked as a human resource organization development consultant. Chris spent his childhood with his elder sister, Melissa Bumstead. Melissa was also an IFBB professional bodybuilder. She doubles as a fitness model.

Growing up, he has always been athletic and he had a knack for sports and weightlifting as early as age 15. Before he started working out he had an interest in different sports like hockey, baseball, and basketball and he participated actively in them.

Meanwhile, the closest contact he had to any form of bodybuilding was the gym. He would be found regularly in the gym where he would work out for long hours every day. Considering his age, Chris would compare his body with others in the gym and conclude that he has achieved the best body shape he could ever have as far as body fitness is concerned.

He held onto this belief until he came in contact with his sister's boyfriend, Lain Valliere who was also a bodybuilder. Lain changed his orientation and made him understand that with bodybuilding, he could achieve the best body shape he has ever wanted. Chris became aware of the many possibilities he could achieve and he began his bodybuilding journey from there. One of the things Chris learned from Latin was competitive bodybuilding.

He kept an open mind and engaged in vigorous training, and in 2014 he made his first competitive debut at the age of 19 and he went ahead to acquire his IFBB Pro card at the age of 21. That was the beginning of his successful bodybuilding journey. Also, considering his achievements at a young age, he has been able to build a large fan base on Instagram and YouTube.

Chris is a Canadian bodybuilder who made his debut at age 19. At the age of 21, he went ahead to obtain his IFBB pro card. He was the winner of the IFBB North American bodybuilding Championship in 2016. That same year, he held the third position at the IFBB Dayana Cadeau Classic.

In 2017 and 2018, Chris placed second in Mr . Olympia of the classics division. In 2019, he placed first in the Mr. Olympia Classic Physique. This was his original plan for entering the Mr . Olympia competition, and he won the classic physique title.

Chris had the privilege of being around the famous and legendary Lou Ferrigno and Arnold Schwarzenegger.

As a young, popular, and successful bodybuilder, it's natural that different women would fight for a position in Chris's life. Because, why not? He has health and tames and that makes him ideal for any woman. Over the years, however, there has not been news of Chris being in any scandal that involves women.

Nevertheless, amidst the throng of women he leaves falling in his wake, Chris is currently dating one woman, Courtney King. Chris and Courtney have been seen more than a couple of times together. They work out together and they get a lot of comments complimenting their healthy lifestyle and body shape. With Chris being a bodybuilder and a fitness model, and Courtney being a personal trainer and nutritionist, their relationship can only be more perfect. They share the same passion and they work together to achieve perfect results.

Courtney King was born on October 12, 1992, in Santa Barbara California. She plays professional beach volleyball. She started as a volleyball player at 16 and eventually became an outstanding volleyball player in America. She and her partner April Ross won the national championship in 2013. She has won many competitions and tournaments with the 2016 Manhattan Beach open not being an exception.

Courtney is one of the most gifted beach volleyball players and she is ranked 11th best player in the world by IVF(International Volleyball Federation). She was also a former IFBB Pro Bikini Competitor, and just like her boyfriend Chris, she is also a fitness model.

Both Chris and Courtney look happy together as is obvious in a recent youtube video that Courtney made, giving details about how she met Chris Bumstead. They share a lot of pictures of themselves on their social media account. As of now, there's no record of a kid or kids between them.

For bodybuilders, it takes years to amass much wealth because most of their wealth increases when they're able to win big competitions like the Mr . Olympia. The prize money for Mr. Olympia is $400,000 and some bodybuilders win this competition twice, thrice, and even more. But for young Chris Bumstead, has won Mr. Olympia once in 2020 and went home with the prize money.

Although his main source of income is his profession as a professional bodybuilder, he is also a fitness model and a social media influencer. The amount he earns from his other careers is not known but it all sums up to a substantial amount.

He is also a co-founder of the company, GetRawNutrition. A company that's given to providing athletes with the best nutrition and supplement for better performance.

So with his many businesses and careers, Chris Bumstead's Net worth is estimated to be $1.5 million. Though Chris has been able to amass such wealth at a young age, he still leads a noble and moderate life. 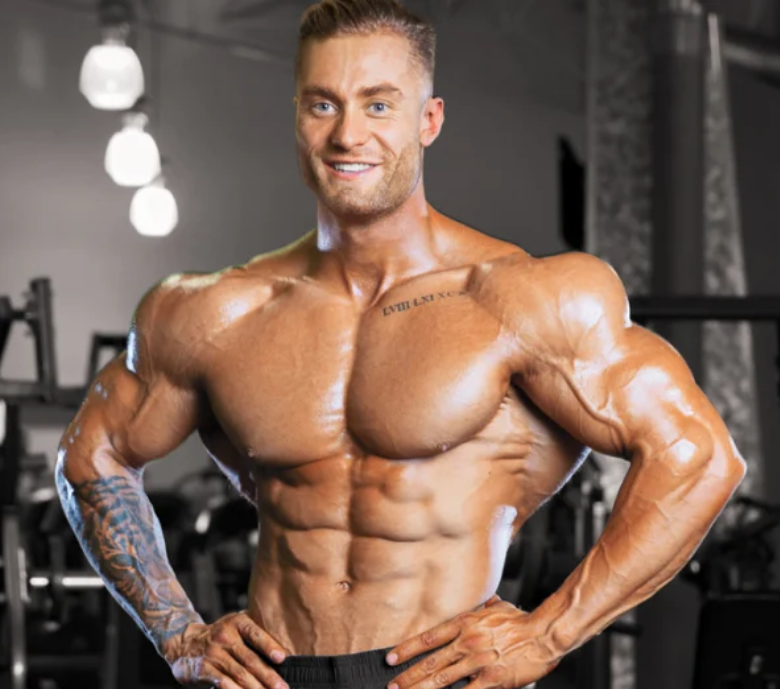 It is common practice among bodybuilders to eat at least 7 meals a day. Chris Bumstead is not an exception and in his case, he is more disciplined about what he takes in. Before every competition, Chris will only repeat the same food that is 6 meals a day every other day for months leading up to the competition. He only makes some slight changes that don't have a significant effect on his diet. He does this so that he can determine the exact nutrients that his body requires to stay in shape, and he can make adjustments if it's required so long as his diet helps him achieve his desired result.

Chris knows better than to add a new variety of food to his diet before a competition photo session. He knows that taking in strange food that his body is not accustomed to can have a different effect on his body that will ultimately disrupt his performance.

During the offseason, Chris takes a step back from his strict diet. However, he still monitors his diet closely and he stays away from junk foods like pizzas and burgers. He remains committed to his bodybuilding diet keeping in mind that there will be the next season.

In his daily meal consumption, he always aims to take in the least 6000 calories from clean protein sources like chicken and rice. Also, for his pre-workout meal, he includes extra carbs in his diet to help him through his workout session. Chris also admits that he eats muffins and carb snacks to help him get more calories to make up to 6000 calories that he needs for his workout.

Chris Bumstead is indeed a lucky young man. From being surrounded by sportspeople like his sister and her boyfriend to having the privilege to build an amazing body before 19. It is almost quite predictable that he'd be a Mr. Olympia champion, but winning that title at an early age is quite an accomplishment. Even as he is a young bodybuilder, he has had the privilege of being around the famous and legendary Arnold Schwarzenegger and Lou Ferringo. He has been able to amass enough wealth and he's still a competing bodybuilder, which means his net worth will increase in the coming years.

How Much Is Jay Cutler Worth?

Yesterday at 6:23 AM
TalkAdmin

How Much is Lou Ferrigno Worth?

What is Kai Greene's Net Worth?