How important is Testosterone?

Of course Testosterone is important for your body and more so if you are a bodybuilder! 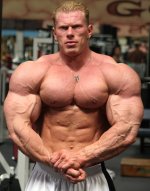 The Importance of Having Testosterone
By Nick Delgado PhD.

Testosterone is an extremely important hormone for both men and women.
This importance begins at conception. It is in fact required to make conception a reality in the first place.


In the July 1996 issue of the New England Journal of Medicine, researchers discovered that testosterone significantly enhanced muscle size and reduced body fat, even in men who did NOT exercise or go on any special diet. In this particular study, there were three groups of male weight lifters who either did the same exercise or no exercise. These men were either given testosterone or placebo every week for ten weeks, and the men given testosterone (they did not know if they got the test or the Placebo), accrued significantly more muscle, whether or not they exercised.


Testosterone is elaborated most heavily in the male, during the rapid period of a boy's maturation. This generally starts at age 11-14 for most boys, and ends by age 16-19. Testosterone has been well-studied from infancy up through adolescence, and medicine is becoming more interested in it's benefits for aging males and females. A man has a total testosterone about 10 times higher than a woman.


In 1934, the scientist who isolated testosterone received the Nobel Prize in medicine. Research on testosterone has demonstrated an overwhelming number of powerful effects, this includes strengthening certain properties of our immune system, sexual and physical maturation processes in males, such as gaining facial and body hair, a deeper voice and a significant spurt in height and weight. Testosterone also enlarges the genitalia.


In the early years, tons of raw bull testes were needed as the only source of human testosterone. Currently a more natural Bioidentical source of testosterone is used commercially and compounded into creams. Other forms of testosterone although less desirable are widely available under prescription as injections, pellets, patches, and some pill forms.


In the early 50's, science discovered that testosterone improved Nitrogen balance, increased muscle mass and(when adequate calories and protein were available), even helped repair damaged bones and ligaments. As it relates to my area of medical study, extending health, energy, strength and function as we age, it's extremely important. A study on men and testosterone was done way back in 1944, by Heller and Myers. After only three weeks of therapy, 20 men, all treated for low testosterone levels and related symptoms, showed enormous improvement in problems with insomnia, depression, being emotional labile (crying episodes), suicidal thoughts/tendencies, inability to concentrate, heart palpitations, headaches, fatigue, muscle pains, urinary problems, general energy, vigor and loss of normal sexual function. Even in the 1960s, some studies showed testosterone lowered cholesterol, improved cardiac function, abnormal EKGs in cardiac patients, relieved chest angina (pain) and helped decrease clogged leg and heart arteries. Once more, when bioavailable testosterone levels were restored to normal, men had less atherosclerosis, or hardening of the arteries. In many diabetics, testosterone administration improved diabetic retinopathy, (having to do with small blood vessels in the eyes), lowered insulin requirements and enhanced glucose tolerance. Testosterone, of course, is present in both sexes, and although it is considered a sex hormone, it contributes to, and is essential for, many functions throughout your body.


Testosterone is either bound or bioavailable. Blood tests measure free, bioavailable, and total testosterone. Testosterone is the critical hormone that modulates so many functions, that it is called the King of all hormones. Testosterone is produced in large quantities in the testes and adrenals in young males. A woman's ovaries produce testosterone and smaller amounts from the adrenals to provide energy, libido and a feeling of well-being. Women report better nipple and clitoral sensitivity, greater sexual function, less depression, and less beast cancer rates. A woman who has had her ovaries removed, not only will need estrogen and progesterone, but also testosterone replacement to feel right. Male teenagers and young adults, have large increases in Bioavailable testosterone, followed by a gradual decrease after about age 20-25, with a steady, slow decline, decade by decade, especially of Bioavailable T, which is most critical.
In certain (rare) instances, men can maintain high testosterone at the upper end of the normal scale into their 50s, 60s and even 70s. In Okinawa, Japan, men and women ages 70 to 100 have significantly higher testosterone levels than men and women in the USA. Once more several studies show that farmers and blue collar workers, (like physical laborers), have an average testosterone higher than white collar workers. Why? Exercise and the diet of farmers or laborers gives them lower body fat. People with more body fat tend to produce higher quantities of estrogens that compete with or suppress normal testosterone activity.


Another killer of testosterone is stress. An attorney may go home at night worrying that his client is innocent and may go to jail for life, while an MD may worry his patient will die on the operating table if he fails to do his job right. Generally speaking though, a plumber may exercise more during his work and burn off potential excess cortisol levels, whether he worries or not about your pipes breaking in the night, or worries that your toilet will overflow so high that you'll drown. People under high stress tend to drink more and smoke too and both cause T levels to plummet! There are many reasons T-levels may decline. And, even the speed of the genetically-coded aging process may be more modulated by testosterone levels, than many had previously considered.


As men age, most will develop relative states of hypogonadism, a condition where your testicles aren't able to produce enough testosterone to maintain a statistically healthy normal level. Women can have a similar problem, since production of testosterone from
their ovaries, also declines with age. Men and women, who exhibit symptoms of deficiency, are generally over 50, but many have signs
starting at the tender age of 25! Those who have low Bioavailable and total testosterone levels should explore replacement therapy,
with their physician or contact me at: agedoc2007@yahoo.com for an anti aging expert referral.


One of the world's leading experts in anti-aging and author of ten books, Dr. Nick Delgado is a media personality who lectures about how to restore vitality and zest of life to youthful levels. Called &#148;the Tiger Woods of Anti-Aging&#148; by Ronald Klatz, President of the American Anti-Aging Academy. Nick has quickly been gaining notoriety as a champion of stem cell research and is a pioneer in the field of stem cell treatment for the purpose of Anti- Aging.

To me testosterone is like magic. When I run trt, I run only 50 mg a week of test cyp and it makes a world of difference. I am currently off every thing and still watch my diet and work out5-6 days a week. The most notable differences are decreased energy, decreased sex drive and increased fat especially around the midsection. Just my overall attitude is down. Test is important