Lee Haney is the first person to win Mr. Olympia consecutively for eight times. This former IFBB professional bodybuilder was the Chairman of the President’s Council on Physical Fitness and Sports before Arnold Schwarzenegger. Lee is one of the most revered bodybuilders who later grew as an author and entrepreneur, he is famously named as- TotaLEEawesome. 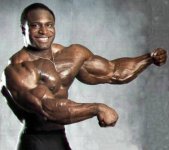 Lee Haney Bodybuilding career:
Haney is one the highly respected bodybuilders that the century has seen. He has bagged long-tailing list of awards and recognitions nationally and internationally. Lee had a great physique with a height of 5 feet 11 inches (6 feet) and competition weight of 245 lbs. Eight times Mr. Olympia champion was the person who broke the record of 7 times Mr. Olympia, Arnold Schwarzenegger and entered the Guinness World Book. However, in October 2005, Haney had to share his Mr. Olympia record with Ronnie Coleman who consecutively won Mr. Olympia titles eight times.
At Spartanburg Methodist College, he was a good football player. An unfortunate leg injury put his dreams behind, still not being deterred by the injury he started weight training to regain the strength in leg. Soon he realized bodybuilding was what he desired and stepped into the professional bodybuilding training.

The first win of his career was in 1979 in AAU Teen Mr. America contest when he was declared as AAU Tall and Overall winner. He participated in heavyweight class for Junior Nationals NPC, 1982 and stood first in that category and won the overall title. In the same year he emerged as an overall winner in Nationals- NPC in heavyweight class and in IFBB World Amateur Championships.
He received several international recognitions in the year 1983 at contests held by IFBB. Lee won the prestigious Grand Prix Las Vegas- IFBB and Night of Champions- IFBB. He stood second in Grand Prix England- IFBB, Grand Prix Sweden- IFBB and stood third in Grand Prix Switzerland- IFBB, Olympia- IFBB and World Pro Championships- IFBB.
Mr. Olympia League: Lee Haney and Mr. Olympia are the terms that are inseparable in the history of bodybuilding. He was the youngest and largest measuring 6 ft and 260 lbs at the age of 24 when he won the first Mr. Olympia title. Lee Haney is known for his consistency and industrious capabilities that won him not one or two but 8 consequent Mr. Olympia- IFBB titles from 1984 to 1991 held at Belgium, Columbus, Goteborg, Los Angeles, Rimini, Chicago and Orlando. After which he stayed away from Mr. Olympia contest. He was featured on Life Styles of the Rich and Famous along with Robin Leach.
Lee Haney received Ben Weider Lifetime Achievement Award from Governor Arnold Schwarzenegger in the year 2010 for his contribution to the field of bodybuilding and the society. He was also honoured for his work in Haney’s Harvest House with awards from International Federation of Bodybuilders, and Bellsouth and Coca Cola Centennial Award.
Further on 16th October 2010, he introduced to the world the international Association of Fitness Science. This is a certification program that is one of a kind in the world. This certification includes understanding the body types, basic nutrition, carbohydrate loading and depletion, training systems and preparation for contests.

Lee Haney As a fitness guru:
Lee Haney has been the most sought educator and trainer who not only help people build muscular and energetic body but he also helps fitness enthusiasts to reach their goals. Lee has sported a herculean figure that was one of the most impressive personalities of the era. Now at the age of 54 years, he is a retired bodybuilder helping the upcoming bodybuilders to come into the limelight. The two fitness centres- Lee Haney’s World Class Fitness Centre, Atlanta, Georgia and Lee Haney’s Universal Centre, Stone Mountain, Georgia are attracting several fitness freaks and bodybuilders for a professional training.
Lee is the trainer of champions. Evander Holyfield and Sean Bradley, Shannon Sharpe and Fred Stokes are the great celebrities who were trained by Lee Haney. Evander Holyfield was successfully trained by Lee that made him strong and capable to win 2 heavyweight titles. Lee eventually worked with Sean Bradley from National Basketball Association, Philadelphia to strengthen him after he suffered a massive injury. Gary Sheffeild the famous baseball player from Florida Marlins also trained under the guidance of Lee to a greater satisfaction in his future career with enhanced overall performance.
In the year 1996, Lee Haney spoke and demonstrated on topic- body building without weights or any other equipment. Lee showed several exercises that a bodybuilder or fitness enthusiast may do to achieve good results. He said, “Recreational drugs such as alcohol, marijuana, nicotine are the muscle killers” and advised them to be avoided. He also discussed regarding the lower back pain which bothers several group of people and gave a exercise regimen- Lee Haney Tug of War and Lee Haney Back Stress Reliever, that would avoid or reduce the incidence of pain in the back. With the help of a volunteer, he showed some muscle training exercises that had same effects on both the partners. Bicep curl, chest and bicep building exercises, explosive pushups, sissy squats, vertical jump, leg curls and seated press were a few exercises Lee demonstrated in the session. Also, he recommended a few exercises that help in building abdominal muscles, triceps such as pull ups or chin ups- sit ups, crunches, dips, and pull ups and chin ups.

Lee Haney As an author:
Lee Haney has written several books educating people about fitness and bodybuilding. He is an active fitness trainer who has designed several training programs as per the requirements of the people. A few books he has written are:

Lee Haney's Personal life:
Lee Haney was born on November 11, 1959 in Spartanburg, South Carolina. He was born into a Southern Baptist family and he had 2 younger sisters and 1 older brother. He studied in Broom High School and went on to Livingstone College in North Carolina. He started playing football in the college and received scholarships for the same with a Juvenile Corrections degree. He received a graduate degree in Child Psychology from Spartanburg Methodist University. He tied knots with the childhood friend Shirley Draper Haney and has two children named as Joshua and Olympia.
Highly devout Christian with deep roots of culture and spirituality, his piety was exuding in whatever he did in his life. Lee has been giving the society more than what he got from it.
At the age of 21 years he started gyms and fitness centres. Earlier Lee’s gyms were called as “The Animal Kingdom” which is renamed now as Lee’s World Class Fitness Centers. Haney has been training and educating top-notch athletes and fitness enthusiasts coming to him. He has 2 physical fitness centres in Atlanta which is recognized by the President’s Council on Physical Fitness, International Federation of bodybuilding and United States Sports Academy. He was appointed as Chairman of President’s Council on Physical fitness and sports by the then President Bill Clinton.
Lee is now happily residing with his family in Fayette County, GA. Along with his wife, Shirley he purchased 40 acre land in Atlanta and created Haney Harvest House. The harvest house is a non-profit organization for children from different races, nationalities and creeds up to the age of 15 years. The harvest house was started with the aim to protect children and provide a constructive place to teach character, respect and love. Haney Harvest House is a recreational space that encourages children to grow in a competitive atmosphere that includes petting zoo, recreational fields and horseback riding.
Lee Haney has many faces to his life. As a bodybuilder, educator, author, TV host and a social worker, Lee has contributed more than he could do to the society. Highly god fearing person he is, that he has shared his personal testimony at churches through the United States.

© Copyright musclemecca.com
Not to be used without permission 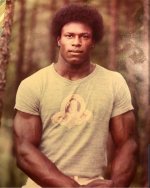 I am using the MuscleMecca Bodybuilding Mobile App!
Click to expand...

Great picture of young Lee Haney! It's been posted here already but it's a great pic.