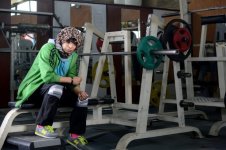 A Libyan 48-year-old female body-builder, Fathiya Al-Amamy, is the only female in a man-predominated sport in the country.


Al-Amamy is training nowadays in eastern Libya to be prepared to take part in the next international body-building competition in Belarus.


“I’m the first champion across Libya, thanks be to God. My first participation was in 2012, in the finals of the eastern region”, she said. “The second championship was in March 2017. It was a championship carried out across Libya and I reached the finals. Now I will be representing Libya in Belarus during Ramadan.” She told Euronews.


Libya has got no gyms and fitness clubs dedicated only for females as the country has a conservative society, but Al-Amamy managed to train since 2012.


“This is the first time a Libyan woman has competed internationally, so we’re hoping that the Libyan sports union will support this woman”, Her trainer told Euronews.