Bec Steele! An amazing woman/bodybuilder! Congratulations on your success! 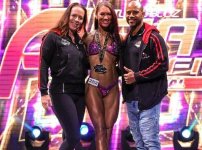 SARINA pharmacy assistant Bec Steele, 31, never imagined she would be representing Australia in body-building when she took up the sport four years ago.


It began more as a hobby. She entered local competitions but only started aiming big when her coaches kept at her and encouraged the idea.


"I competed at a regional level, but it wasn't until I started working with Leonie (Leonard) and Terence (Darby) that I took it further,” she said.


"I guess they saw more potential in me than I had myself.


"They pushed me to go further and so I did some comps in Townsville, which was Australian Natural Bodz Muscle Mania, and that's when I qualified to go to Vegas.”


In fact, Ms Steele qualified for the 2016 Las Vegas competition, Fitness America, at the end of last year, but as the event was taking place only a month later, she decided she needed more time to prepare.


"I set my sights on this year instead, and so I competed at the Asia Pacific comp about a month ago and that's when I made the team to go,” she said.


"I won an automatic spot on the squad as I won my division, which was the open category, but I also won the overall division.


"I was over the moon and still am very excited, although I think my hubby is even more excited than me.” 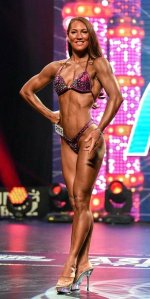 Sarina bodybuilder Bec Steele, has been selected to compete in Las Vegas.


Ms Steele is also feeling the nerves, having never competed at such a high level or against international calibre athletes before.


"Other than those two small competitions I've never done anything this big,” she said.


"Not to mention, I've never actually been overseas, so that's exciting and nerve racking in itself.


"Either way I can't wait to get over and see what it's like, I may take a break after but if the experience is amazing perhaps I'll get straight back into it after Vegas and work toward the next big thing.”


Now, 12 weeks out from the competition, Ms Steele said heavy preparation would begin, involving a rigorous exercise regime and a strict 'clean' diet.


"It might sound hard but my routine is actually a lot easier than many other athletes,” she said.


"Many prep for about 16 to 20 weeks, I'm lucky that I stay fairly lean in the off-season, mainly so I don't have to work as hard before comps.


"Soon I will be amping training up to five or six sessions a week, and I'm eating six small meals a day of meat, vegies and potato, just healthy foods.


"My hubby actually laughs because I eat more than he does, which is fine because I love my food.”


Ms Steele said she is looking forward to competing in November and hopes to bring back gold for the region and Australia.