Why do some athletes use Steroids?

Why is it that many athletes use steroids to build muscle and increase performance? It is a good question and you may find the answer here! 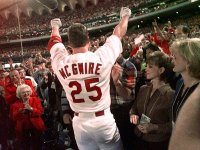 Why Athletes Turn to Steroid Alternatives
By Douglas Scott

Among amateur and semi-professional bodybuilders, steroid use has traditionally been viewed as a double edged sword. One school of thought eschews the use of performing enhancing substances, while another has held them up as the key to rapid muscle mass gain.

Many high school physical education teachers inform their units on weightlifting with an ominous warning about the dangers of anabolic steroid use. Yet, young athletes see their idols -- from baseball players to bodybuilders -- using performance enhancing substances. The obvious question is: how much of that fame and achievement stems from the athlete's natural ability -- and how much came from the aid of performance enhancing substances?
The Internet and Steroid Sales

Proponents of steroid alternatives claim that a number of substances that are not directly related to synthesized, or anabolic steroids offer many of the benefits of anabolic steroids -- an increase in muscle mass and a metabolism geared toward burning fat -- but without detrimental effects of anabolic steroids. A short list of those negative side effects includes hormonal imbalances, liver damage and elevated "bad" cholesterol.

Even so, professional athletes have turned to steroids -- legal or otherwise -- to build muscle and attain a competitive edge. And the world watches.

There is no worldwide standard on what qualifies as an "illegal" substance in the sport of competitive bodybuilding, for example. Instead, substances prohibited by regulatory authorities vary between bodybuilding federations. Illegal anabolic steroids and substances known as prohormone and diuretics are believed to be widely used by professional bodybuilders and are generally banned by natural bodybuilding organizations.


Another School of Thought

As the name implies, natural bodybuilding associations focus on physical fitness and nutrition in order to achieve a level playing field for body shaping enthusiasts. Often, these associations open their competition to related forms of body aesthetics, such as figure, female physique, junior level and physically challenged categories. Some organizations conduct their own drug screening regimen for participants. In an effort to make their policies clear, many of these federations choose to include a list of banned substances on their Web pages. These may or may not include products known generically as steroid alternatives.

Steroid alternatives can be found in over-the-counter compounds in most health and drug stores. Yet they are not all labeled -- or created -- alike. The products the U.S. Food and Drug Administration listed in its Warning Letter to American Cellular Laboratories Inc., in the summer of 2009 include "TREN-Xtreme," "MASS Xtreme," "ESTRO Xtreme," "AH-89-Xtreme," "HMG Xtreme," "MMA-3 Xtreme," "VNS-9 Xtreme," and "TT-40-Xtreme." The FDA states that these products claim to contain steroid-like ingredients but in reality contain synthetic steroid substances that are unapproved since they are not generally recognized as safe and effective. The Administration also says that the products are misbranded because the label is misleading and does not provide sufficient directions for use.

Products in the steroid alternative category are not without their own risks. And they will likely come under increased scrutiny by federal regulators as individual products send up red flags. Yet the fact that the market exists speaks to a collective desire among athletes to see fast results in muscle mass, strength, and stamina -- a desire that outweighs the risks.

Douglas Scott has been gathering information on steroids and writes articles to share his findings.

But I guess the side effects of using steroids for long are adverse.
Similar threads