There were many takeaways from the 2016 Olympia Weekend that was completed on Saturday evening at The Orleans Arena. For the most part, the favorites did well and there were not that many surprises. (Well, it is Las Vegas, the betting capital of the world that we’re talking about.) With that said, let’s take a look at some of the winners and losers from the previous 72 hours.

*Phil Heath (1st) – He once again stood in the winner’s circle in men’s open bodybuilding and was the clear cut deserved winner of his sixth consecutive Sandow. That puts him in some serious company, matching the mark previously set by Arnold Schwarzenegger, Lee Haney, Dorian Yates and Ronnie Coleman.

*Shawn Rhoden (2nd) – “Flexatron” placed his highest ever with the runner-up spot and it seems as if he is finally being rewarded for adding some size to his aesthetic physique. This space has preferred Rhoden’s older look, but he seemed to be stuck in the third/fourth placing with a smaller, yet more pleasing, physique. He will still be the bridesmaid unless Heath retires (not likely, especially until he breaks the record of eight O wins shared by Haney and Coleman) or he comes in really off.[/FONT][/COLOR]
*Dexter Jackson (3rd) – Yes, he did slip one spot down from 2015. But at 46, a top-three finish at the IFBB’s most prestigious show of the year is an amazing accomplishment.

*William Bonac (5th) – The Netherlands native has been spoken about as an up and coming bodybuilder and has not disappointed. He could have even fared better here, but getting in the posedown here seems to be like the first step in what is shaping up to be a very successful career.

*Roelly Winklaar (6th) – He has been something of an enigma throughout his up and down career, so a top-six placing at the Olympia is a positive step for Winklaar. He is one of the more massive guys on the circuit and a big fan favorite.
*Dallas McCarver (8th), Josh Lenartowicz (9th), Justin Compton (10th) – Three more up and coming names and top-10 is a great springboard for all of them. Bigger and better things are ahead for this young trio.

*Mamdouh Elssbiay (4th) – Bigger things were expected out of “Big Ramy” here and he appeared to be making an attempt at streamlining his humongous physique as much as possible. It didn’t transcend into success, even though he placed a spot higher than last year and his career best. A top-three had to be the prize Ramy was seeking.

*Cedric McMillan (7th) – Perhaps he could have landed a spot higher, but Big Mac cannot be satisfied with this placing. Even if he was sixth, McMillan is supposed to be a top threat and simply was not that this time around.

*Victor Martinez (11th) – Time may be running out on “The Dominican Dominator.” He has had an amazing career filled with great comebacks from terrible injuries and personal tragedies.

*Nathan DeAsha (12th) – He should have certainly fared much better than this spot and looked better than many who placed higher. DeAsha had a top-10 physique in this line-up; plain and simple.

*Steve Kuclo (13th) – The Texan has not made the type of improvements that have been expected of him when he first turned pro.

*Pen Pakulski (14th) – “Pak Man” appeared to be moving up in tiers just a few short years ago, but this finish takes a lot of that away.

*Kevin Levrone (DNP) – It’s hard to knock anyone who gets on stage at 52 after 13 years away from the sport and with only approximately five months of prep time. For a bodybuilder who competed recently, that may sound ridiculous, but Levrone was not even thinking about coming back until the beginning of the calendar year. So he deserves a world of credit for what he accomplished, but his physique was not on par with the competition and he would be perfect for a Masters division if the IFBB brings it back. A lot of hype surrounded this comeback and it didn’t pan out the way many had hoped.

*Brandon Curry (DNP) – People forget that “The Prodigy” made the top-10 at the Olympia only a few years back because that turned out to be an anomaly rather than a sign of things to come. 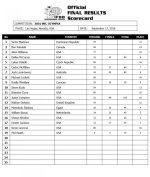 Last edited by a moderator: Thursday at 5:28 PM

Did anyone see the video of Big Ron walking on crutches at the Olympia?? Sad. he,ll always be a winner in my book.

TM817 said:
Did anyone see the video of Big Ron walking on crutches at the Olympia?? Sad. he,ll always be a winner in my book.
Click to expand...

He's had a myriad of health issues the past few years. His body is breaking down from all of the juice and heavy weight he used. It is pretty sad and I hate to say it, but a guy like him is probably not going to live into his 80s.

I know... I use to follow Ron whenever he was in the New York,New Jersey area 2003-2009...He was super huge and now he can hardly walk.. sad.
Similar threads