45 month ban for steroid use?

Even tennis players use steroids sometimes to get all they can out of their bodies. 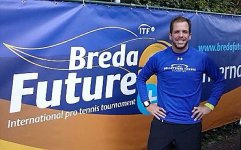 This tennis player from Brazil, Americo Lanzoni got a 45 month ban by the ITF for alledged steroid use!

LONDON -- The International Tennis Federation has banned a Brazilian doubles player for three years and nine months for using an anabolic steroid.


His highest doubles ranking was No. 1552 and he never held a singles ranking, according to his profile page on the ITF website.

Tom Platz talks about his past steroid cycles.