In a sport driven by testosterone, female bodybuilders often get overshadowed by their male counterparts. However, we should not forget that a bodybuilder has to sacrifice a lot to get ready for a bodybuilding stage irrespective of the gender to which they belong. Hence, bodybuilders deserve the same level of respect, no matter what gender they belong to. Today, we’ll have a look at 7 such female bodybuilders who successfully competed and made their way into a sport that’s dominated by men. 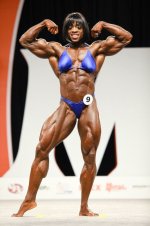 The list has to start with this name as she’s undoubtfully the most successful bodybuilder, male or female, of all time. She has ten Ms. Olympia titles and seven Ms. International titles under her name. It wouldn’t be incorrect to say that she would’ve ended with more number of Olympia if the competition was not discontinued for women in 2014. That was the last time she competed and tallied her title for a total of 10 times, a record in itself. Nicknamed as ‘Female Ronnie Coleman’ due to her winning streak in Ms. Olympia contest, Iris grabbed her pro card at the age of 23 years. She was known for her 3 dimensional delts and thick back which resembled the current Mr. Olympia Phil Heath. Iris was motivated towards bodybuilding when she saw Lenda Murray in a magazine and decided to make a physique like hers. She even competed against Lenda and lost to her twice in 2002 and 2003. Later on she beat Lenda in 2004. 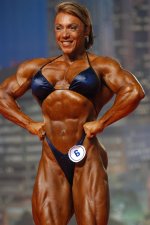 Yaxeni ranks the second best female bodybuilder in the International Federation of Bodybuilding and Fitness Pro Women’s bodybuilding list. Born in 1966 in Venezuela , Yaxeni started her career with modeling and acting. She took up bodybuilding later on and won 4 amateur bodybuilding contests in her native country before moving to US. Thereafter she won 5 Ms. International titles and also went on win the Ms. Olympia title in 2005. Her latest accomplishment was when she placed second at Ms. International in 2013. Her legs and abs were her strong muscle groups which dominated her to victory. Now she owns a gym in Miami where she provides personal trainings and trains herself too. 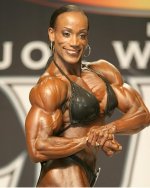 A name that’s taken with utmost respect, lenda murray, dominated the American Bodybuilding throughout the 90’s era. She is the reason that we see so many female athletes take up the sports. She was one of first female bodybuilders that came up with sheer size and symmetry that was never seen before. This is the reason that she remained unbeaten from the year 1990 to 1995. Even in the subsequent years 1996 & 1997, she came as a runner up at the event. After taking a gap of 5 years she again took the stage with a storm by grabbing 2 consecutive Ms. Olympia’s in the year 2002 and 2003. With broad shoulders, perfect V shape torso and symmetrical legs, Lenda fixed a benchmark for women Physique against which the female bodybuilders all over the world are judged even today. Her name was inducted in IFBB hall of fame in 2010. Though she retired in 2004 and runs her own gym, she still maintains a good fitness for herself. 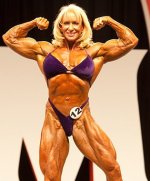 Betty Parios holds the record of becoming the first women in the history of bodybuilding to earn her IFBB Pro card at the age of 40. Infact, she was the world’s oldest active professional bodybuilder while competing. Born in the year 1956 in Kentucky, Betty started her career as a model. She was thin in her twenties and took up weight training in her early thirties to stay fit. She liked it so much that she decided to take professional bodybuilding as her career. She began competing in the year 1988 and won her Pro Card status by the year 1996 after winning the NPC nationals. She made her first pro win in the year 2001 when she won the heavyweight class at the Jan Tana Classic. She also won the 2006 female athlete of the year award at the FLEX awards for her outstanding achievements in the bodybuilding Industry. She is the only female athlete who has ever competed at the age of more than fifty, making it a big achievement in itself. Her massive delts and arms were her strong muscle groups which gave her a different identity. 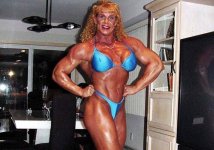 Known as the world’s largest female Bodybuilder, Nicole had an extensive bodybuilding career throughout the late 80’s and 90’s. Her best win was the 1997 NPC National bodybuilding Championship and her best placing was 14[SUP]th[/SUP] at the 1997 IFBB Ms. Olympia. She was also a known female wrestler and competed at various wrestling events. She joined the World Wrestling Federation (WWF) and Wrestle Mania and was a recognized face at these wrestling events. She died last year at the age of 52 but her physique will be remembered for a long time. Nicole was as huge as any male bodybuilder. She had huge torso and her waist line was also thick. She had a look that was quite contrary to other female bodybuilding competitors which gave her a different identity on stage. She was never too dry even in her competing days. Even on a bodybuilding stage, she looked more like a wrestler due to her large shoulders and waist line. 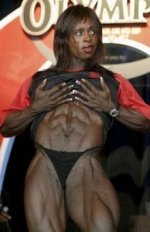 Dayana is the most successful female athlete of Canada. She earned her pro card in 1997 by winning the Canada Cup and thereafter she came to US. Initially she competed as heavy weight when IFBB first introduced weight classes in 2000. Thereafter she competed as lightweight. Year 2004 was her most successful year in bodybuilding as she won the light weight title in the Ms. International and Ms. Olympia. She placed second at Ms. Olympia from 2006 to 2008. Barring a couple of competitions she always remained in the top 6 in every IFBB pro competition. She was also known as the Flex wheeler of the female bodybuilding due to the aesthetics that she had. She was absolutely dry and cut up to the core with absolutely no gut whatsoever. 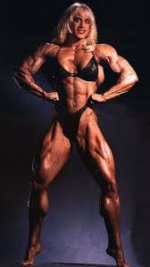 One of the freakiest female bodybuilder ever in terms of muscle mass, this mother of two today, doesn’t even look like she ever stepped on the stage. Now she just looks like any other fit lady in her 50’s. Such is the transformation that she has gone through after retiring from competitive bodybuilding. However, when she used to compete, her stats of 17’’ biceps, 28’’ quads and 46’’ chest could give nightmares to every competitor out there. She was unbeaten in Ms. Olympia from the year 1996 to 1999. She was huge as well as symmetrical and was perfect with the posing routine too.
Missed out on someone in the list? Let us know in the comment section if you think there should be someone else too in the list.
Last edited by a moderator: Jun 29, 2018