A Look Back at the Inaugural Mr. Olympia Contest 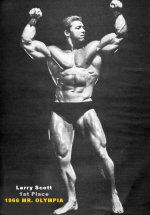 No one in attendance that night back in 1965 could have foreseen the growth of the contest and industry as a whole, not even Joe and Ben Weider, the now-late architects behind that inaugural Mr. Olympia show held at the Brooklyn Academy of Music. Bodybuilding may still be a niche sport, but it was even more esoteric five decades ago.

At the time, there were three prestigious titles – Mr. Universe, Mr. World and Mr. America – but not one that would supersede the other. So the Weider brothers did what would seem like the obvious thing – create an overall title to crown the greatest bodybuilder in the world.

That evening, three IFBB-sanctioned categories took place – Mr. America, Mr. Universe and the aforementioned Olympia. Two hours into the event, it was time for the headline act to make its way onto the stage. As emcee Bud Parker took the microphone, the first disappointment of the evening awaited the audience. Only three men had accepted the Weider’s invitation to the contest, apparently not sold on it being the ‘end all’ of bodybuilding titles at this early juncture.

The first up was Earl Maynard, who did not excite the crowd as much as expected performing the same routine that they just saw when he won the overall Mr. Universe. Harold Poole more than made up for that with a raucous ovation that Joe Weider described as a reaction with “renewed fervor.”

“I was surprised at the outburst of cheers and applause that greeted Harold Poole,” Weider stated in his book, “Mr. Olympia – The History of Bodybuilding’s Greatest Contest” (St. Martin’s Press, 1983). “I hadn’t thought I’d hear such uninhibited fan enthusiasm.”

Strutting onto the stage with his 5’10” and over 200 pound frame, the New Yorker concluded his posing routine with what was being called “The Poole Pose,” otherwise known in the bodybuilding circuit as the crab. The ovation continued even after he “disappeared into the stage wings,” was how Weider chronicled it.

Just as the cheers for Poole began to dissipate, a chant of “We want Scott” began, so loud that when Larry Scott was introduced, it was inaudible. Stepping out and beginning his posing routine with showmanship, Scott going last may have seemed like a stroke of Weider genius, but the three men striving for the Olympia drew numbers out of a hat backstage to decide the order.

Although the Mr. America and Universe winners were mostly pre-determined by the judges in advance, the Olympia competitors were scored on their routines right then and there. This made for charisma and personality having a lot to do with their final scores, and Scott no doubted made it official with his stage presence.

Being named the inaugural Mr. Olympia will be a moment in time for Scott, although he did not walk away any richer that evening. The Weiders had planned to give the winner a cash prize, but expenses in running the show and putting up international IFBB representatives in hotels made that impossible. Scott did leave wearing a jeweled crown, but he and Joe Weider had to wait until after 2:00 am to sneak out a back door. What probably seemed like a scene out of “A Hard Day’s Night” when the Beatles had to dodge adoring fans, The Master Blaster and Scott were pushed back in the theater during an earlier attempt to leave by “three burly Brooklyn cops” to avoid the rush.

By the time the two of them arrived at the hotel for the after party, Scott made a quick exit to go to sleep so that he would be ready to go for the next day’s early photo shoot. A true champion is always prepared!
Last edited by a moderator: Jun 5, 2018