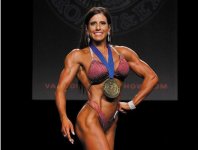 
So he's quick to come to her defence when he hears people speak in unflattering terms to describe her passion for the sport of bodybuilding.


His 40-year-old mom pumps iron regularly, is religiously devoted to her gym workouts, and as co-owner of Prince George store specializing in dietary supplements and health food products, she practices what she preaches.


Holden defends her lifestyle, just don't ask him to drink one of her kale, spinach and peanut butter smoothies.


Roberts' efforts at getting into shape were rewarded on the stage Sunday at the Vancouver Pro/Am & Expo fitness competition.


She won the open provincial and masters (35-and-older) figure classes to qualify for the Canadian Bodybuilding Federation Figure, Fitness and Physique Canadian Nationals, July 29 in Surrey.


The five-foot-six Roberts not only won her medium height figure B competition but was judged the overall winner in the open class, which guarantees she is a lifetime qualifier for the national event.


"Now, because I won overall I never have to go to back to provincials, which is cool," said Roberts.


"I'm definitely coming in as a bit of a favourite this time. All the judges made sure to encourage me to go to nationals this time."


The three-week interval between shows is perfect timing to maintain her muscle definition and overall form, said Roberts, who owns Active Body Nutrition with her boyfriend, Mark Becker.


Since February 2016 she's been working with coach Darren Mehling of Freak Fitness of Winnipeg, a professional coach who works with Olympic-calibre weightlifters, who put Roberts on a program she's been following.


"Given the coaching system I hired and just aiming really high for myself I wanted to prove to myself I could not only do well but take the whole show, and that was the goal from Day 1," said Roberts.


She eats six or seven times per day, avoids sugary foods, and works out with weights at X Conditioning. The results are obvious. Her arms and legs are ripped with muscle mass and she could probably grate cheese on her lean six-pack torso.


"A lot of people have a misconception that we would actually starve ourselves to get on stage but that couldn't be further from the truth," said Roberts.


"I wake up at night and eat if I need to, and that's how you retain can muscle and get lean at the same time, getting your metabolism going."


"I didn't do an excess of cardio, I just have a very well-tuned machine that did what it needed to do with the proper guidance."


At her first competition in 2011, the Northern Classic in Fort St. John, Roberts won her masters category and rose quickly on the fitness scene. Three years later, she captured the provincial masters figure title. The following year, seeking her International Federation of Bodybuilding pro card, she competed at the national championships in Halifax.


"To become a professional athlete in bodybuilding is hard and very rare, they give out only one card per year per division and I kind of pooched it hard in Halifax and fell to the bottom," said Roberts.


That pro card will be on the table and is hers to grab if she wins her overall open category at the national competition in Surrey.


Roberts coaches people to help them make choices which lead to better overall health and uses her own example as a guideline. The mother of three had more fat than muscle and suffered a persistent back ailment when she started making lifestyle changes. Progressively she grew interested in taking her fitness obsession to a new level as a competitive athlete.


"I used to be fat and out of shape when my two oldest (now 19 and 21) were young," said Roberts. "My weight hasn't changed, I can push to 160 pounds right now but I look better than when I was 160 of fat. I was getting into big-girls clothes and I had bad knees and a bad back.


"I saw myself in a picture and I didn't recognize myself. I lost myself in parenting and taking care of others and didn't realize how important it was to take care of yourself first. I started walking and eating better and going to the gym. Nutrition is the key. I had always dreamt of being in shape and if your goals are achievable I truly believe you should always aim higher."