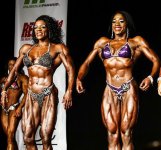 It's a good thing Bridgett Annett is in great shape. Otherwise, she'd never be able to carry all her hardware home.


It was her first attempt at getting an IFBB pro card after changing federations.


“It was unreal, especially your first time,” she said. “There are people there who have been trying 15 years to get it.”


Annett shared the stage with her 27-year-old daughter, Basia Everett-Annett, who placed in the top five overall and landed a modelling contract.


Everett-Annett was also at a NPC national championship for the first time, although she and her mother are veteran competitors.


Bridgett typically competes in the bodybuilding category, so she had to lose weight for the physique category. Basia, on the other hand, had to gain weight since she's normally a figure competitor.


“We both decided to switch over from the federation we were in and went on a whim, which is crazy because they said it was the second-biggest show in the U.S.A,” Annett said.


Annett made her NPC debut at the Michigan championships in June. She walked off with first place despite undergoing knee surgery in mid-March.


In New Jersey, she was first in her height class and first overall in the over-35 and over-40 divisions. She was also first in her class in the open division before placing second overall.


She's aiming to reach the 2018 Olympia championships in Las Vegas.


“That's where you get the best in the world,” Annett said. “Even if you don't win, to be on that stage is an honour.”


To get there, she'll have to win a pro event. She's already checking the calendar for competitions to enter.


“Those people have been amazing,” she said about the Ironworks members.