Cannabis based drug finally approved by the FDA! 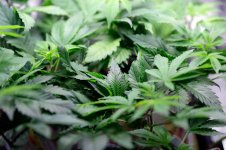 This is a huge step forward towards getting Cannabis legalized I think! This is the first time any Cannabis based drug has been approved by the FDA!

(CNN)The US Food and Drug Administration approved a cannabis-based drug for the first time, the agency said Monday.

Epidiolex was recommended for approval by an advisory committee in April, and the agency had until this week to make a decision.
The twice-daily oral solution is approved for use in patients 2 and older to treat two types of epileptic syndromes: Dravet syndrome, a rare genetic dysfunction of the brain that begins in the first year of life, and Lennox-Gastaut syndrome, a form of epilepsy with multiple types of seizures that begin in early childhood, usually between 3 and 5.
"This is an important medical advance," FDA Commissioner Dr. Scott Gottlieb said in a statement Monday. "Because of the adequate and well-controlled clinical studies that supported this approval, prescribers can have confidence in the drug's uniform strength and consistent delivery."
The drug is the "first pharmaceutical formulation of highly-purified, plant-based cannabidiol (CBD), a cannabinoid lacking the high associated with marijuana, and the first in a new category of anti-epileptic drugs," according to a statement Monday from GW Pharmaceuticals, the UK-based biopharmaceutical company that makes Epidiolex.


(WASHINGTON) — U.S. health regulators have approved the first prescription drug made from marijuana, a milestone that could spur more research into a drug that remains illegal under federal law.

The Food and Drug Administration approved the medication from GW Pharmaceuticals on Monday to treat two rare forms of childhood epilepsy.

The strawberry-flavored syrup is a purified form of a chemical in the cannabis plant — but not the one that gets users high. It’s not yet clear why the ingredient, known as CBD, reduces seizures in some people.

The British drugmaker studied the drug in more than 500 patients with hard-to-treat seizures, overcoming numerous legal hurdles to conducting research with cannabis.

The U.S. Food and Drug Administration today approved Epidiolex (cannabidiol) [CBD] oral solution for the treatment of seizures associated with two rare and severe forms of epilepsy, Lennox-Gastaut syndrome and Dravet syndrome, in patients two years of age and older. This is the first FDA-approved drug that contains a purified drug substance derived from marijuana. It is also the first FDA approval of a drug for the treatment of patients with Dravet syndrome.

CBD is a chemical component of the Cannabis sativa plant, more commonly known as marijuana. However, CBD does not cause intoxication or euphoria (the “high”) that comes from tetrahydrocannabinol (THC).

It is THC (and not CBD) that is the primary psychoactive component of marijuana.

“This approval serves as a reminder that advancing sound development programs that properly evaluate active ingredients contained in marijuana can lead to important medical therapies. And, the FDA is committed to this kind of careful scientific research and drug development,” said FDA Commissioner Scott Gottlieb, M.D. “Controlled clinical trials testing the safety and efficacy of a drug, along with careful review through the FDA’s drug approval process, is the most appropriate way to bring marijuana-derived treatments to patients. Because of the adequate and well-controlled clinical studies that supported this approval, prescribers can have confidence in the drug’s uniform strength and consistent delivery that support appropriate dosing needed for treating patients with these complex and serious epilepsy syndromes. We’ll continue to support rigorous scientific research on the potential medical uses of marijuana-derived products and work with product developers who are interested in bringing patients safe and effective, high quality products. But, at the same time, we are prepared to take action when we see the illegal marketing of CBD-containing products with serious, unproven medical claims. Marketing unapproved products, with uncertain dosages and formulations can keep patients from accessing appropriate, recognized therapies to treat serious and even fatal diseases.”

“The difficult-to-control seizures that patients with Dravet syndrome and Lennox-Gastaut syndrome experience have a profound impact on these patients’ quality of life,” said Billy Dunn, M.D., director of the Division of Neurology Products in the FDA’s Center for Drug Evaluation and Research. “In addition to another important treatment option for Lennox-Gastaut patients, this first-ever approval of a drug specifically for Dravet patients will provide a significant and needed improvement in the therapeutic approach to caring for people with this condition.”

Epidiolex’s effectiveness was studied in three randomized, double-blind, placebo-controlled clinical trials involving 516 patients with either Lennox-Gastaut syndrome or Dravet syndrome. Epidiolex, taken along with other medications, was shown to be effective in reducing the frequency of seizures when compared with placebo.

The most common side effects that occurred in Epidiolex-treated patients in the clinical trials were: sleepiness, sedation and lethargy; elevated liver enzymes; decreased appetite; diarrhea; rash; fatigue, malaise and weakness; insomnia, sleep disorder and poor quality sleep; and infections.

Epidiolex must be dispensed with a patient Medication Guide that describes important information about the drug’s uses and risks. As is true for all drugs that treat epilepsy, the most serious risks include thoughts about suicide, attempts to commit suicide, feelings of agitation, new or worsening depression, aggression and panic attacks. Epidiolex also caused liver injury, generally mild, but raising the possibility of rare, but more severe injury. More severe liver injury can cause nausea, vomiting, abdominal pain, fatigue, anorexia, jaundice and/or dark urine.

Under the Controlled Substances Act (CSA), CBD is currently a Schedule I substance because it is a chemical component of the cannabis plant. In support of this application, the company conducted nonclinical and clinical studies to assess the abuse potential of CBD.

The FDA prepares and transmits, through the U.S. Department of Health and Human Services, a medical and scientific analysis of substances subject to scheduling, like CBD, and provides recommendations to the Drug Enforcement Administration (DEA) regarding controls under the CSA. DEA is required to make a scheduling determination.

The FDA granted approval of Epidiolex to GW Research Ltd.

The FDA, an agency within the U.S. Department of Health and Human Services, protects the public health by assuring the safety, effectiveness, and security of human and veterinary drugs, vaccines and other biological products for human use, and medical devices. The agency also is responsible for the safety and security of our nation’s food supply, cosmetics, dietary supplements, products that give off electronic radiation, and for regulating tobacco products.

The problem is the US Gov't and big pharma are doing it for their own benefit...