A LARGE great white shark has been sighted in a lake on the New South Wales Central Coast, prompting warnings for people to take caution in surrounding waterways.

A commercial fisherman snagged the beast this morning while casting nets off Canton Beach, on the north side of Tuggerah Lake, which opens into the Pacific Ocean at The Entrance.

A police statement said the man was forced to release his nets when the full-grown white shark, estimated to be up to seven metres long, became entangled in them.

No one was injured during today's incident.
Click to expand...

There's probably sharks in the swimming pools too.

Holy shit, I went fishing right near that at Wangi less then a week ago. In a boat that wasn't even half the size of that shark 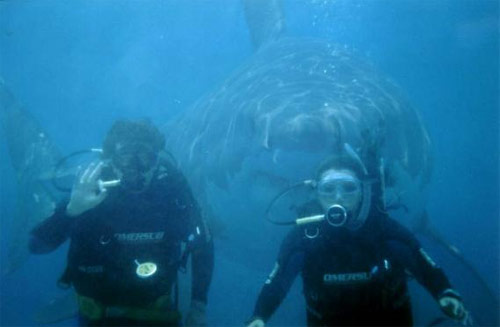 Man this is one of the reasons why i don't go to the beach. Im really skeptic about what lurks beneath me all the time when im in the sea and sometimes i get caught by the current and get dragged heaps far out from the shoreline, i get really worried as i paddle as fast as i can to get back. Once when i was young lets say 11 i almost drowned from it.

I hate the sea.

Its not even the sea, its in a lake!
D

In a fucking lake ? How the hell did he get there ? Travel misslocations ?
R

in africa, zambezi river has bull sharks and they are known to kill people throughout the river there. just because its fresh water dont mean its safe

Its a salt water lake... Adaption? im thinking it just swam in there by accident.

A commercial fisherman snagged the beast this morning while casting nets off Canton Beach, on the north side of Tuggerah Lake, which opens into the Pacific Ocean at The Entrance.
Click to expand...

I'd say it swam in there by accident. Great Whites are by nature deep water sharks which generally spend most of their time off the continental shelf.