Egypt kicked ass in bodybuilding in 2017

Nobody can deny that Egypt had a great year in terms of bodybuilding and sports in 2017! Big Ramy alone was a major achievement and there was much more! I really did not know about most of these! 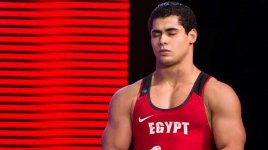 The year 2017 will come to an end in a few days, leaving great memories for Egyptian sports at the local and international levels.

The Egyptian national team was drawn to play against Saudi Arabia, Russia (the host), and Uruguay in Group A of the 2018 FIFA World Cup.

The Pharaohs also reached the final of the 2017 Africa Cup of Nations held in January in Gabon after seven years of absence. The national team, led by Argentinian coach Hector Cuper, presented strong performances and secured the second place in the African tournament after losing to Cameroon in the final match 2-0.

Farag and El Tayeb make history at US open squash

Egyptian couple Ali Farag and Nour El Tayeb wrote their names into the history books as they triumphed at the 2017 US Open to become the first married couple in sporting history ever to win the same major sports title on the same day.


The duo—who married last year—defied the odds to defeat higher seeded and higher ranking opposition to secure the titles, the first PSA World Series titles of both of their careers. The PSA World Series Squash Finals is the end of season championship of the PSA World Tour of male professional squash players and of the WSA World Tour of female professional squash players.

Farida Osman made a historic achievement by winning Egypt’s first medal in swimming during the World Championship held in Budapest. By winning her first National Collegiate Athletic Association (NCAA) medal in the US, Osman has proved herself to be the third fastest butterfly swimmer in history. Her swim, which lasted 50.5 seconds, was reported to be the seventh fastest overall swim in history.

Osman won the Best Female Athlete from Africa at the Association of National Olympic Committees (ANOC) Awards 2017 held in Prague, Czech Republic, in recognition of her outstanding sporting achievements.


Egypt made history in weightlifting championships


Egypt wins at both men and women’s squash championships

Egyptian couple Ali Farag and Nour El Tayeb made history on 14 October as they triumphed at the 2017 US Open to become the first married couple in sporting history ever to win the same major sports title on the same day.

The Egyptian squash team won the World Squash Championship title after defeating their English counterpart 2-0 in the final round of the tournament in Marseille, France. The national team won the title for the fourth time in its history after having achieved it three times in the years 1999, 2009, and 2011, while losing the last title of 2013 to the English team.

Egyptian champion Hania Al-Hamami also claimed the biggest title of her career and her first title since 2015, as she was crowned winner of the Slaight Music Granite Open after her opponent and compatriot, world number 65 Yathreb Adel, was forced to withdraw from the tournament due to injury. The injury of Adel forced the player to withdraw, giving the title to teammate Hania Al-Hamami.

Egypt came in second place at the World Karate Championships, for youth under 21 and juniors, and won a total of 15 medals at the competitions that took place in the Spanish city of Santa Cruz de Tenerife from 25 to 29 October.

Egypt’s Ramadan Darwish won the under 100 kg gold medal at the 2017 Tashkent Grand Prix after defeating Niyaz Ilyasov of Russia in the final.

Well it is not really the first county that I think of when I think of leading the bodybuilding world but I guess it is good news. Always like to see up and comers and new countries making strides like that.