Fans Will Help Select The Winner Of The 2018 Mr. Olympia 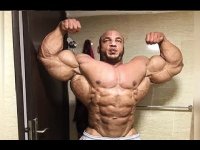 This year maybe we do not have to worry about biased judges picking Mr. Olympia! If you are attending the 2018 Mr. Olympia then you get to help do it this year!

For The First Time Ever, Fans Will Help Select The Winner Of The 2018 Mr. Olympia
Fans attending the 2018 Mr. Olympia will do more than just watch the greatest bodybuilders in the world on the sport's ultimate stage--they'll pick the winner!

NEW YORK, July 10, 2018 /PRNewswire/ -- American Media, Inc. (AMI), owner of the Mr. Olympia contest and Joe Weider's Olympia Fitness & Performance Expo, today announced that for the first time in the event's history, fans will cast one of the votes to select the 2018 winner of the Mr. Olympia, the sport's premier event. This also marks the first time ever that this type of voting will be used at an IFBB Professional League event.

"Having our fans vote for Mr. Olympia continues AMI's tradition of adding new and exciting experiences to the sport's premier event each year," said AMI Chairman and CEO David J. Pecker. "The 2018 Olympia will make history because it raises the stakes for all the competitors, ensuring that the field taking the stage at Orleans Arena on September 14 and 15 will be the best ever."

Ticket holders for the judging round on Friday, September 14, and the finals on Saturday, September 15, will receive a special code with which they can evaluate each competitor and cast their vote on their phones. The fan votes will be collectively counted as one vote, joining the votes of the judges on the panel.

"The audience at a bodybuilding contest is different from those of the UFC, the NFL, and other sports," IFBB Pro League President Jim Manion says. "The fans are more than spectators—they live bodybuilding and fitness. Just go to any show and you can see it isn't your normal passive crowd. Many compete or have competed before. They are experts and know what to look for, and I believe they deserve a say in the final outcome."

In the event the athlete earning the fan vote does not win the title, that competitor will be crowned the 2018 People's Champion.

Today's announcement generated an immediate reaction from the IFBB pros planning to compete:
"Hearing that the fans will have an active role in who they feel should be the 2018 Mr. Olympia is a great idea! I will do my very best and give it my everything to be the last man standing in Las Vegas come September." —William Bonac, 2018 Arnold Classic champion and 2017 Mr. Olympia second runner-up.

"Fan voting changes the game and will make a huge difference. I am all for officially naming a People's Champion, because I am always the People's Champion." —Shawn Rhoden, 2016 Mr. Olympia first runner-up.

"Yes! I think this is going to be great! I'm always the People's Champion, so this could finally be Sandow No. 2 for me!" —Dexter Jackson, 2008 Mr. Olympia.

Interestingly enough, Phil Heath, the current Mr. Olympia, who will be going for his record-tying eighth Sandow trophy, had no comment on the fan voting.

To secure your ticket to the 2018 Mr. Olympia, and your chance to make history, go to mrolympia.com today. In addition to the latest updates on the 2018 Mr. Olympia and the hundreds of events and exhibitors on display at Joe Weider's Olympia Fitness & Performance Expo, you can also find complete contest rules, the official schedule of events, and much more.

So all the fans get one vote and the judges will get the rest?

Would be better if there were no judges.