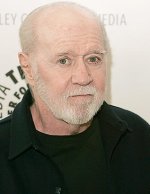 ET breaks the news that comedian George Carlin has died from heart failure. The man who made famous the "seven words you can never say on television" passed away at 5:55 p.m. Sunday at Saint John's Hospital in Santa Monica, his longtime publicist said. He was 71.

Carlin, who has had several heart attacks and a history of cardiac issues, went into the hospital this afternoon after complaining of heart problems.

Carlin has more than 20 comedy albums, 14 HBO specials, numerous TV and movie roles, and three best-selling books to his credit. Last year, he celebrated his 50th year in show business, and he had just finished his last HBO special in March, "It's Bad for Ya."
Click to expand...

This is a sad way to start the day.


I was a huge fan and will miss him.

have no idea who he were though...

George was amazing, so sad to hear this.

Damn. I loved George too. Sad to see such a funny guy leave us.

I laughed. I know he wanted me to.
R