Giuseppe Ippolito closing in on a record!

Giuseppe Ippolito is about to break a record! I know some American bodybuilders that probably beat him though.

Check out his urine sample! 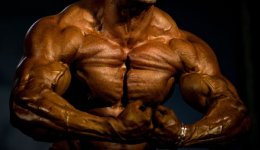 Italian bodybuilder Giuseppe Ippolito is closing in on a dubious world record - how many steroids can you cram into one body at the same time?

Anti-doping agency NADO Italia has confirmed that Ippolito tested positive for 14 different substances after last month's Italian Federation of Bodybuilding Championships in Rome.
He has been provisionally suspended.


But he still has some ways to go for the record.


Italian rugby player David Vasta also tested positive for 11 substances last year, but claimed to have taken them while competing as a bodybuilder.