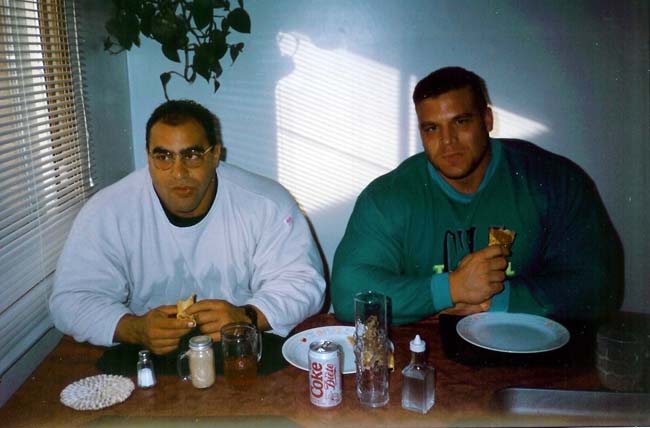 Since everyone keeps asking me to talk about Nasser El Sonbaty. . .about how we met and became, what I thought at the time, good friends. . . for this week's column, I will tell the full story so you can understand how surprised I was when I read about all the horrific lies he told about my wife and me in his interview on bodybuilding.com. To this day I don't understand why he focused on bashing me for no apparent reason, especially after how hospitable and kind my wife and I were to him when he came to Toronto in the winter of 1995.

My first interaction with Nasser was through the telephone a few months before he came to Canada. My good friend and Jason Mathis knew I was a huge fan of Nasser and he happened to interact with him from time to time. I asked Jason the next time he talked to Nasser if he would ask him if he minded talking to me on the phone because I admired him and wanted to pick his brain about training and nutrition. To my surprise Nasser agreed and we spoke shortly after that. I was very impressed that Nasser would take the time to chat with me considering his status (at the time he was a top 3 Olympian) and the fact that he didn't even know me. I found this to be a nice gesture on his part.

He and I hit it off on the phone. After that, he researched me and found a few pictures in a magazine from a visit I made to Venice that previous summer. He told me I had great potential. He also gave me great advice and we talked several times after that. Ironically, Nasser told me that he was coming to Toronto to do an appearance at the Musclemag store that my friend Paul Gardiner (the future owner of Muscletech) managed. I was really excited to meet my hero and we made arrangements for me to pick him up at the airport the night before his appearance. Following the appearance, we planned to have him stay at my home for a few days because he was going to the U.S embassy in downtown Toronto to renew his visa for the States. 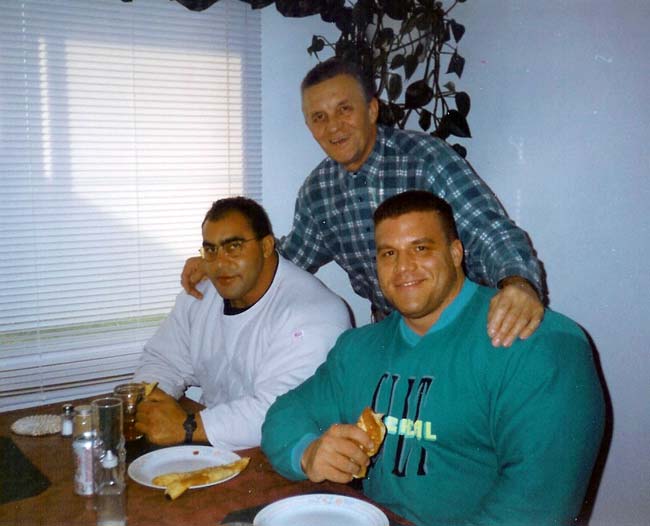 So I was excited that "my friend" was coming down and we were gonna train for a few days. I was stoked to have the opportunity to learn from one of the best. On the Friday he arrived, my wife and I came to pick him up and when he came through the security gates the first sign that something wasn't night right surfaced. He was acting a little distant and reserved and he peered oddly at me through his spectacles. I think he was a little shocked and intimidated at my size in person. I don't think he was prepared to feel small at his off-season 310 pounds, at the time. I was a little over 400 pounds so I guess that threw him off. By the time we checked him into his hotel, he seemed a little more comfortable and relaxed and the MuscleMag appearance was a lot of fun.

As I said, after the appearance was over, he stayed at our home which was about an hour's drive from Toronto. He had to be at the Embassy on Tuesday morning. I should point out that it was the dead of winter at the time and Nasser had been living in California so he was not accustomed to our Canadian winters. I think he complained about how cold it was at least 20 times a day and progressively more as each day passed. So when we set out to the Embassy on the Tuesday morning he was eager to get his visa so he could go back to Los Angeles the next day. However, we were all in for a big surprise when we got there.

When we arrived at the U.S. Embassy, there was a huge line. After waiting for almost 3 hours they told Nasser that there was a problem with his renewal and that he would have to take care of it before he could leave the country. So, basically, he was stranded in Canada until he sorted out these issues. To say he was angry was an understatement. If I recall, his glasses were steamed up and his face and cranium were a few different shades of red.

Nasser, Kovacs, and Kovac's Dad
After driving back to our home, we called his lawyer and started the process to get the issues resolved. It took 3 weeks before everything was sorted out. Now, I was a huge fan of Mr. El Sonbaty but a house guest is like a fish; it can get rotten fairly quickly. During this time, we had to drive back and forth to the U.S. Embassy every few days until the matter was sorted out. That's over a 2-hour round trip. There was always something else needed, or a form to fill out, or a fax the lawyer in California had to send. He stayed at our home, ate our food that my wife cooked for him, visited my parents on their farm a few times, and he ate there food. During that time, he never once offered a penny for gas for all the driving or for all the food he ate. He even used my gear. Yes ladies and gentlemen, both Nasser and I used anabolic steroids. Shocking; but true.

I often wonder what he would have done if my wife and I would not have taken him in and basically treated him like family and helped him out of his situation. Would he have stayed in a hotel and eaten at restaurants? Would his issues have been resolved as quickly without our help? Or would he have been trapped in Canada and deported back to Germany? His wife, at the time, was frantic and we had to console her regularly over the phone. What sort of a demented character is Nasser that he had the audacity to talk so terribly about people that went out of their way to help him out? He may have been a great bodybuilder but, as a man, he doesn't even know the definition of the word. And, to me, a man's character is so much more important than anything else. In the end, I actually feel sorry for the guy. After such an illustrious bodybuilding career, he's become nothing more than a bitter ex-competitor. He's lowered himself to angry broken down bodybuilder who criticizes the sport that made him a star.

Kovacs over and out!

Another great pic of evolution of Brandon Curry

Another great pic of Brandon Curry in Australia