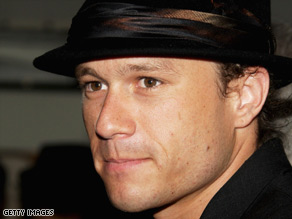 "Mr. Heath Ledger died as the result of acute intoxication by the combined effects of oxycodone, hydrocodone, diazepam, temazepam, alprazolam, and doxylamine," the office said in a short statement.

"We have concluded that the manner of death is accident, resulting from the abuse of prescription medications."

Ledger died January 22 at an apartment in Lower Manhattan. The Oscar-nominated Australian actor, best known for his role as a stoic, closeted cowboy in the 2005 film "Brokeback Mountain," was 28. Watch why Ledger's death probably was ruled accidental »

CNN has learned the Drug Enforcement Administration has requested the toxicology and prescription records related to Ledger's death. The DEA requested the records Wednesday from the New York Police Department and the medical examiner's office after the release of the report detailing the cause of death, according to a law enforcement source who asked not to be identified by name or agency because the request concerns an active investigation.

The DEA confirmed it will look into anything suspicious concerning Ledger's death. "We will investigate any leads in respect to this," DEA spokesman Garrison Courtney said while declining to provide any specifics. "In any case, we look to see whether prescription drugs were illegally obtained or whether it was through proper channels."

An autopsy done on the actor January 23 was inconclusive. Interactive: A look back at Heath Ledger's life »

In a statement released through Ledger's publicist, Ledger's father, Kim, said Wednesday: "While no medications were taken in excess, we learned today the combination of doctor-prescribed drugs proved lethal for our boy. Heath's accidental death serves as a caution to the hidden dangers of combining prescription medication, even at low dosage."

The family added, "Families rarely experience the uplifting, warm and massive outpouring of grief and support as have we, from every corner of the planet. This has deeply and profoundly touched our hearts and lives. We are eternally grateful." Read the full statement

Ledger had talked about his difficulty sleeping after back-to-back roles as a Bob Dylan figure in "I'm Not There" and the Joker in "The Dark Knight," part of the "Batman" series that is due out this summer.

"Last week I probably slept an average of two hours a night," Ledger told The New York Times in November. "I couldn't stop thinking. My body was exhausted, and my mind was still going."

In the hours leading up to Ledger's death two weeks ago, a housekeeper, identified as Teresa Solomon, arrived at the apartment about 12:30 p.m., a police source with knowledge of the investigation said.

She saw Ledger lying on a bed face down with a sheet pulled up around his shoulders and heard him snoring, the source said.

Masseuse Diana Wolozin arrived at the apartment about 2:45 p.m. to give Ledger a massage, according to the police source. About 15 minutes later, when he had not come out of the bedroom and the door remained closed, she went in, saw him lying in bed and set up a massage table.

She shook Ledger, but he did not respond, so she used his cell phone to call actress Mary-Kate Olsen, a friend of Ledger's, in California, the source said.

Wolozin told Olsen that Ledger was unconscious, according to the police source.

Olsen reportedly told her that she would call private security people in New York.

At 3:26 p.m., Wolozin called 911 and told authorities Ledger was not breathing. While on the phone with dispatchers, Wolozin tried to perform cardiopulmonary resuscitation on Ledger, but he was unresponsive.

Emergency personnel arrived seven minutes later, according to the police source, at about the same time as a private security person summoned by Olsen.

The medical technicians performed CPR on Ledger and used a cardiac defibrillator, but their efforts were in vain and he was pronounced dead at 3:36 p.m. By then, two other private security people summoned by Olsen had arrived as well as police.

His former fiancée, actress Michelle Williams, has asked the public to respect the need for her, the couple's 2-year-old daughter, Matilda, and others "to grieve privately."

"My heart is broken," Williams said in a statement issued last week via her publicist. "I am the mother of the most tender-hearted, high-spirited, beautiful little girl who is the spitting image of her father. All that I can cling to is his presence inside her that reveals itself every day. His family and I watch Matilda as she whispers to trees, hugs animals, and takes steps two at a time, and we know that he is with us still. She will be brought up in the best memories of him."

Condolences poured in from Ledger's friends and co-stars.

Colleagues on Terry Gilliam's film "The Imaginarium of Doctor Parnassus," which Ledger had been shooting in England, said the actor apparently had been suffering from a respiratory ailment in the days before he died.

Christopher Plummer told Entertainment Weekly that Ledger had a "terrible, lingering bug in London, and he couldn't sleep at all. We all -- I thought he'd probably got walking pneumonia."

Ledger's first American film was the teen comedy "10 Things I Hate About You" in 1999. He passed up several scripts before taking a role in the Revolutionary War drama "The Patriot" in 2000 and "A Knight's Tale" in 2001. He also played a supporting role in "Monster's Ball."

But Ledger was perhaps best known for his portrayal of Ennis Del Mar in "Brokeback Mountain," Ang Lee's film about two cowboys who had a secret romantic relationship. The role earned Ledger a best actor Oscar nomination.
Click to expand...

That seems like a pretty lethal cocktail of prescription drugs, even at the prescribed dosages.

See what happens when you dont know shit about mixing drugs Line. :io:

Line said:
That seems like a pretty lethal cocktail of prescription drugs, even at the prescribed dosages.
Click to expand...

I'm surprised his doctor didn't tell him that all those medications shouldn't be taken at the same time. Those are some serious prescription drugs that could cause death just by accidentally overdosing on one of them.