Shit, I remember reading about this company here years ago, like in 2008! I think their bodybuilding supplements were shit. Looks like the ceo is pretty fucked again! 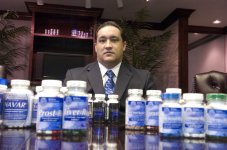 Atlanta dietary supplement CEO Jared Wheat is once again in the crosshairs of federal authorities, this time facing 18 criminal charges that cover a variety of business practices.


An indictment, unsealed Thursday, lays out a laundry list of allegations against Wheat and his Norcross-based company, Hi-Tech Pharmaceuticals, that, if proven, could send the well-known supplement entrepreneur to prison for the third time in nine years.


The indictment accuses Wheat of wire fraud, money laundering, introducing misbranded drugs into interstate commerce and manufacturing and distributing controlled substances. An associate, John Brandon Schopp, is also identified as taking part in some of the alleged schemes.


Wheat’s attorney, Bruce Morris, said Thursday he was limited in what he could say because he had yet to familiarize himself with every element of the indictment.


“We just received a copy of this and there appears to be a disagreement about the products we’re producing,” he said. “They have been produced openly for a while and are sold by well-respected retailers.”


Responding to an email from The Atlanta Journal-Constitution, Wheat said he would not have anything to say to the newspaper.


The attorney listed in the court record for Schopp, identified as Hi-Tech’s director of contract manufacturing, did not immediately respond to a phone message requesting comment. 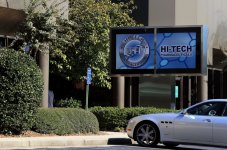 Hi-Tech Pharmaceuticals and its owner, Jared Wheat, have been on the federal government’s radar for more than a decade. PHIL SKINNER / PSKINNER@AJC.COM The Atlanta Journal-Constitution


In the indictment, federal authorities assert that Wheat and Schopp committed wire fraud by concocting a series of phony documents to make it appear to customers that Hi-Tech’s products met various U.S. Food and Drug Administration standards.


In some instances, according to the indictment, Wheat and Schopp created fake FDA Certificates of Free Sale containing the unauthorized signatures of government officials and unauthorized government agency seals. Such certificates are issued by the FDA to indicate that products are marketed in the U.S. and eligible for export.


The indictment also alleges that Wheat and Schopp created Good Manufacturing Practice certificates and audit reports that contained the signature of an individual identified as the general manager of a company, PharmaTech, purported to be an independent third party. In truth, the individual, identified only by initials, never worked for PharmaTech, and the company was in fact controlled by Wheat, the indictment contends.


In charging Wheat and Hi-Tech with manufacturing and distributing controlled substances, the government alleges that at least five “prohormone” supplements sold by the company contain anabolic steroids — Schedule III controlled substances that can’t legally be obtained without a prescription.


Wheat, 45, served two years in federal prison after pleading guilty in 2008 to conspiracy to commit mail and wire fraud as part of a case in which he and others were prosecuted for selling knock-off prescription drugs. The drugs were purported to be from Canada but were in fact manufactured in Belize under unsanitary conditions.


Wheat again was in federal prison in 2014 for failing to carry out a product recall stemming from a civil proceeding brought by the Federal Trade Commission over advertising for Hi-Tech’s weight-loss products. He was released after two months when the FTC reported that the recall had been completed.


In addition, Wheat has had a running court battle with the FDA since its seizure of $2 million worth of Hi-Tech goods and raw materials containing the stimulant DMAA in November 2013. The FDA seized the materials after the AJC reported that the company had continued to sell products with DMAA despite the government’s effort to purge it from the market.


Wheat sued the FDA, asserting that DMAA is in fact a natural ingredient found in geraniums, but U.S. District Judge Willis B. Hunt Jr. ruled this past April that the material was unlawful and the government had a right to take it.