Horse Busted for Steroid Use!

Actually it was the trainer, 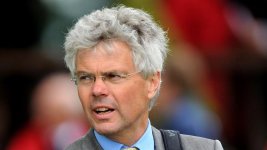 Morrison faces ten-year ban for use of anabolic steroid

A trainer faces a ban of up to ten years after he was charged yesterday by the British Horseracing Authority following the discovery of an anabolic steroid in a routine test on one of his horses.


At the same time, racing’s governing body also issued a call for anyone with information that could help to solve what happened and how the horse could have been nobbled to contact them on its confidential hotline.


In a case that has all the elements of a Dick Francis thriller, Hughie Morrison’s horse Our Little Sister was chosen by random for a test after finishing last in a two-mile race at Wolverhampton on January 14 this year.


Nandrolone, a performance-enhancing steroid, was found in the urine sample. Morrison, who trains at East Ilsley in Berkshire, has denied any wrongdoing and insisted that it was administered by injection maliciously by someone who had a grudge against him.


He has put up a reward of £10,000 for information that could help to clear his name. Morrison yesterday said that he had given a list of people with potential grievances against him to the BHA, but had no idea whether they had been interviewed. He hopes, too, that forensic evidence collected by the BHA would be shared with his legal team.


Since the failed test result, Morrison and the BHA have been co-operating behind the scenes to try to trace the source of the drug and why, how and when it could have been administered.


Both parties have drawn a blank and without an explanation that would clear Morrison, the trainer is facing a potentially ruinous case that could have huge repercussions for his career. Morrison’s yard was raided at dawn on February 3 and all 77 horses in the stable, including Our Little Sister, who has since been retired, were blood tested. All proved negative.


The hearing by an independent judiciary panel is expected to be held at the end of next month but could be pushed back if Morrison feels he has not had sufficient time to prepare his defence. Penalties range from a one to ten-year suspension and/or a financial penalty.


The onus is on Morrison to establish who administered the steroid. New zero-tolerance rules were brought in two years ago after the case of the Godolphin trainer, Mahmood Al Zarooni. He was banned for eight years in 2013 after 11 horses in his Newmarket stable were found to have been administered with illegal steroids.

Morrison, 56, a group one-winning trainer, had gone public on his plight in a newspaper report yesterday. “I am doing everything I can to get to the bottom of this,” he told The Daily Telegraph. “We have brought in one of the world’s leading experts from America. We’ve found out through our own research that it cannot be a contamination issue.


“We have carried out an extensive search around the stable. We questioned a possible flaw in the testing, but a B sample sent to Paris also came back positive. What on earth could I have to gain from this? Our Little Sister was a horse of limited ability, in a race with hardly any prize money, and there was no unusual betting.


“My reputation is everything. I might annoy a few people, but everyone knows my integrity is 100 per cent.”

What on earth could I have to gain from this? Our Little Sister was a horse of limited ability, in a race with hardly any prize money!
Click to expand...