In the ring with Anderson Silva 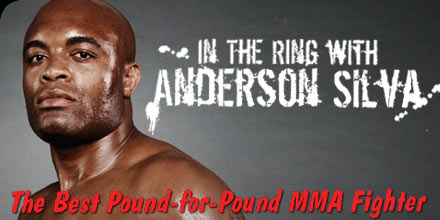 Not only is Silva the best striker in all of MMA, a lethal trifecta of pinpoint accuracy, speed and knockout power, he may be the most humble fighter in the sport, always gracious in victory and respectful in the Octagon. His combination of other wordly talent, humility and accessibility to fans has made Silva perhaps the most revered and respected Mixed Martial Artist in the world today.

Since making his UFC Middleweight debut against Chris Leben in June of 2006 with a KO win 49 seconds in, Silva, a Muay Thai specialist that also holds a Jui-Jitsu black belt from the famed Noguria brothers, has run his UFC record to 7-0 with victories so resounding he's now considered by many to be the best pound for pound fighter on the planet.

After his destruction of Leben, where he landed an incredible 100% of his strikes, Silva went on to capture the UFC Middlweight belt in October of that year from Rich Franklin, TKOing the former champ inside of 3 minutes.

After four defenses at 185 lbs which included another one sided victory over Franklin and a second round victory over Pride champion Dan Henderson, Silva temporarily moved up to Light Heavyweight in July and knocked out James Irvin at 1:01 of the 1st round.
Click to expand...

*Link for the interview*

mayweather jr. back in the ring