Bhumika Sharma won the title ahead of a total of 50 bodybuilders from around the world. She won the maximum points in three categories i.e., individual posing, body posing and fall in. She is the first Indian woman to win the title. 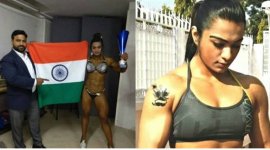 Bhumika won the title ahead of a total of 50 bodybuilders from around the world. (Source: Twitter)


Dehradun body builder Bhumika Sharma has won the Miss World title in Venice. Bhumika, who was one of the 27 Indian participants who were in the competition, won the maximum points in three categories i.e., individual posing, body posing and fall. This eventually won the gold medal at the world championship in Venice last week.


Bhumika won the title ahead of a total of 50 bodybuilders from around the world, according to Hindustan Times. Bhumika also said that she has now set her eyes on the Miss Universe Championship that will be held in UK in December.


According to the Hindi publication of the Hindustan Times, Bhumika has been in the sport for the past three years. Her mother Hansa Manral Sharma is the head coach of Indian weightlifting team while her father Vishwavijay Sharma is a businessman. Her parents wanted her to take up shooting but a chance meeting with a bodybuilding coach had convinced her to take up a career in the sport.


Her mother is also a Dronacharya award recipient from the Uttarakhand government for her contribution to the weightlifting. Her parents were skeptical of her choice of career with women’s bodybuilding being an obscure sport not just in India but around the world as compared to the men’s tournaments. But she eventually won them over and soon, she went on to win state and national honours before winning the Miss India.