Toney Freeman: The defending champ came on like a black tsunami last year winning the Sacramento, IM Pro and before that, the Europa. But he fell a bit at the Olympia last year. Came in off and I think he's a bit hungry now to keep his title. Toney's strengths are his obvious X-frame and up until this past Olympia, his conditioning. He has, repeat, has, to come in at the top of his game. He has great symmetry and can pull off a lot of poses men smaller than him cant. He looks good at all angles. Just needs to be dry and hard, without being flat(which is ideal for a competitive bodybuilder anyway)

Gustavo Badell: The Freakin Rican, with new Weider contract in hand is aiming to reclaim the title he won in 2005. Lets not kid ourselves, we all saw the flexonline.com pics(well, most of us) and we know he has the density and thickness to do well, but he has trouble having everything flow together. On top of that, he has been real hit or miss with his conditioning the past couple of shows. I still think he has a great side chest, with hams that just accentuate the pose, but his legs have been looking very shallow(compared to his winning form), which tells me has been doing a lot of cardio. He may want to put an extra wratch on the diet and cut a bit on the cardio IMO 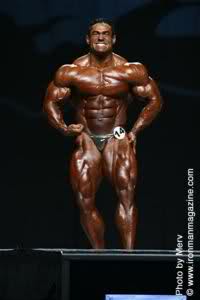 Phil Heath: The gift, The heat, Mr Playstation 3, whatever you want to call him, call him gunning, because thats what he is doing. He put on a lot of muscle and from the insider reports I have been getting, he aint's playing in the gym. His weakness, and I still stand by this as I did when he won the USA, is that he is not wide enough. A lot of muscle, but needs to widen the area out there some. His symmetry is a major weapon as he also looks good from every angle.


Silvio Samuel: I think he needs to sit down and chill as it looks to me, his body is starting to tire out and not come in as fast as it did in the past. I understand that he is hungry for success, but he is really not doing himself any favors to his body by doing this show. I will say that he has improved at every outing, with his apex in 2007 being the Olympia. He quickly shut my ass up when I knocked he had no leg seperation earlier in the year.Needs to improve his arms though, and additional presentation practice wont hurt either. 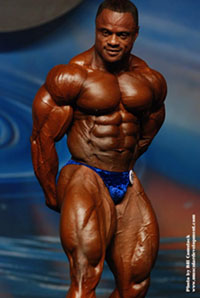 
Desmond Miller: Freak in the almost every sense of the word. That wont help him here. He is going against guys who have just as much muscle as him, but with better taper, more density, and more experience on an IFBB stage than him. When you waist is just as wide as your back, there is a problem. I am not all that impressed with arms or back, but as long as the judges like his legs and say fcuk everything else...he'll do fine.


Troy Alves: Grandpa!!!!!!! I want troy to do well, as he needs to get back up in the mix also. Troy, leave the bodyweight alone!!!!!!! Just get as hard as possible and you will go back to the Olympia. He has one of the top 10 structures in the sport right now, and needs to be hard a 'la 2005. That was a great showing, and while I will not say he needs to get back to that, he needs something similar to, or a condition that will surpass that. 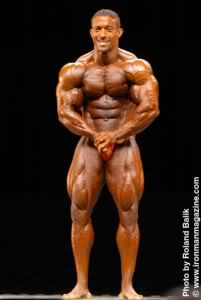 
Johnnie Jackson: Will not be in shape. Period. When he is, he is a sight to behold. He beat ass last year, and represented in the Olympia, even though his legs are still a liability and not an asset. 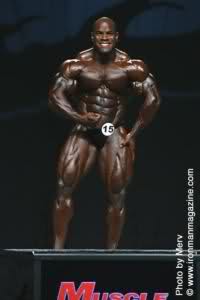 Eddie Abbew: Needs more mass and depth all over. Had a dream season last year, that I dont think he can repeat. 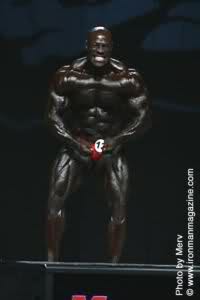 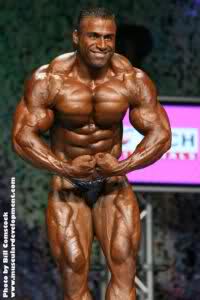 
Ray Arde: I hope this extended break he had did him well. I also understand that he is a personal training studio/gym. Take note bodybuilders, handle your business and get money. I like him ever since the Collegiate Nationals. Me and Hany got into it about me saying he was cut with a butterknife, but oh well. I think he is wise to compete in his backyard and start to establish himself. 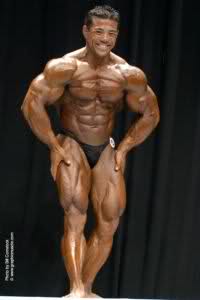 Paco Bautista: If I said Desmond Miller wont do great here, and Paco has a worse structure tha him...what do you think my opinion will be on him. He makes Des look like Bob Paris. 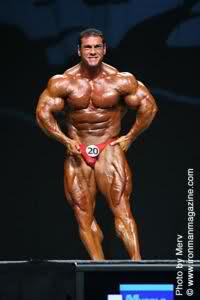 
Troy Brown: I have not seen many pics of him, but have seen him on the boards, and he seems to be a genuine guy who wants to do well. He is in England, and we know what thsoe guys are capable of! 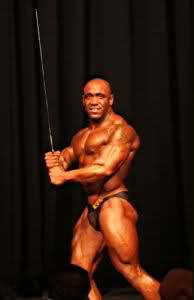 
Rodney Davis: Another tall guy, but at his age, he will have to work doubly hard to fill his frame out. Not a real big factor.


Omar Deckard: I though him and Hany did a good job last year. Humongous chest is something tha really makes him stick out form the rest. He needs to keep brining improved conditioning and and even more density to his body, as I thought he looked kind of "raw" in a sense last year. If he can bring a bit of refinement to his physique, he can move up. 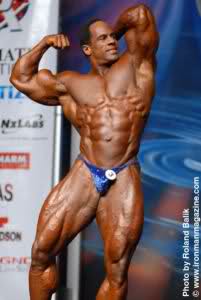 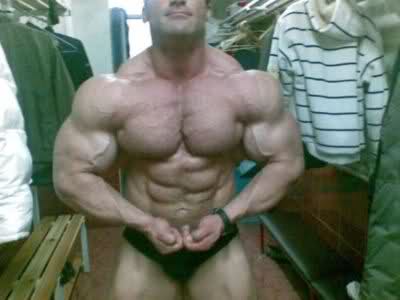 Moe Elmoussawi: Great guns, but he has a habit of coming in soft. Has the tools, now he has to shine em up. 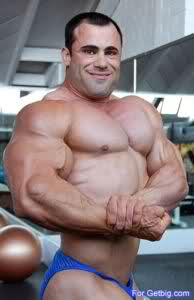 
Deshaun Grimez: He looked okay last year. Was in great condition for his heavyweight win at the USA, but he is in the bigtime, and he has a bit of a thickness problem. Now hear me on this before you lynch my black ass. His muscle dont push against the skin like someone who pushes that weight. While I agree there is more than one way to get a great physique, he may have found the way that will bite him in the ass. 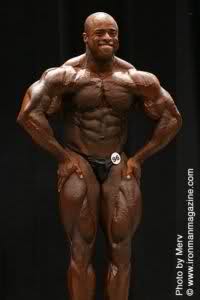 David Henry: Consistent, ripped to the bone, thick, and ready to go. A liabilty is his back double bicep. He like Phil Heath is not all that wide, but if Labrada can overcome it, so can he.

Rusty Jeffers: Mr "No Country for Old Men" has a very good physique reminiscent of the old 70's bodybuilders. Not a weak part on him. Problem is, he is about damn near 3 decades behind. Has got to come in solid. 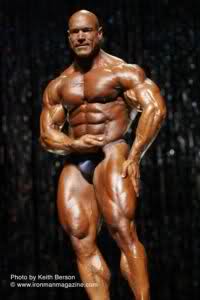 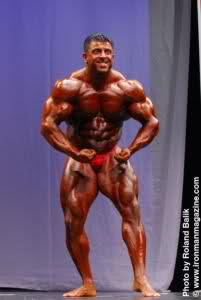 
JoJo Ntiforo: Anoother one with a conditioning problem. I blame that to him being from Ghana(Africa) originally. African born bodybuildersdo not get that paper thin skin. Ask Orville Burke. However, he does not have a weak point either. Very well put together. Just needs to be in condition. 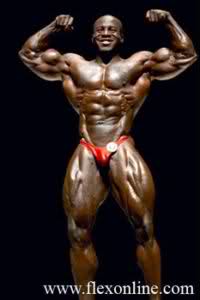 
Armin Scholz: Germanys other big man. Has been improving a a great reat also. But he needs to get conditioned also. It's funny, for small bodybuilders, condition is no problem, but mass is. For big Guys like Armin, mass is no problem, but conditioning is. I hope he can get himself to a point where it is not a problem.
Jimmy Canyon: Needs more mass. Until then....sorry. 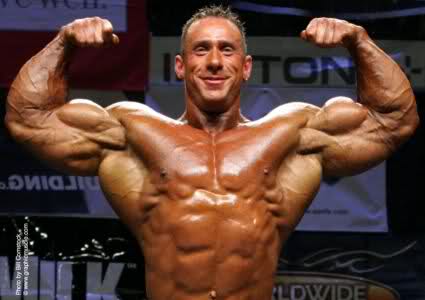 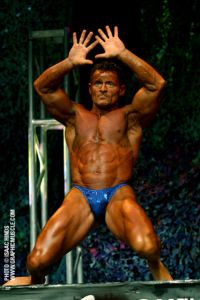 
Will Harris: The dark horse. legs are a bit shallow, and his arms are nothing to write home about, but if he can be consistent in his conditioning, he can get an O qualification here. And being from Cali hlps also.

Well, thats it. Want my picks(not that I really care if you dont) here they are

agreed in all but in the 4th - 5th spots, i expect someone cracking the top 4-5, someone like a rebuilt desmond, or armin, jojo etc etc, someone who can nail conditioning

badell aint going to loose from harris and alves...the worst he could get is 3rd imo

lol at the Jones and Kamali comments.

Maybe it's just that pic but Rodney Davis looks like he's fit in better in an amateur competition.

Pro Ironman Champion Silvio Samuel is to be released from Prison