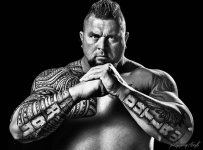 If you watched the 2018 Arnold Strongman Classic then you saw Jerry Pritchett missed finish 6th. Let's watch him next year though! My bet is he will do much better than 6th!

Jerry Pritchett , the 37-year-old strongman hails from Phoenix, Arizona. He started as a powerlifter when he was 15! Jerry's first ever participation in a strongman contest happened back in 2008 when he found a local competition in Phoenix, Arizona where he came in 2nd! After that, he did some powerlifting but eventually started focusing more on the sport of strongman.

Jerry Pritchett stands 6 feet 4 inches tall and maintains a weight of over 350 pounds. He wakes up at 3.30 AM, leaves his home at 4 AM, and gets to work at 5 AM, puts nine hours there and then goes to hit the gym at 3 PM.


In May of 2016, Pritchett made news in the world of powerlifting when he did a record-breaking 914 pounds deadlift in Salt Lake City.


Before this year Arnold strongman classic, in an interview, he said this:
“I want to sit on top of the podium that’s the ultimate goal, it’s to win the Arnold. It’s going to happen, whether it happens this year, or next year…it’s going to happen.”

Jerry Pritchett held the deadlift world record of 1031lbs until it was broken by Hafþór Júlíus "Thor" Björnsson at the 2018 Arnold Strongman Classic.

We wish him all the luck in his future endeavors.

Here are some of Jerry Pritchett's competitions:

Strongman Jerry Pritchett:
"When you want to succeed as much as you want to breathe, then you'll be successful"
View attachment 16980

One of the best deadlifters on the planet.
Similar threads