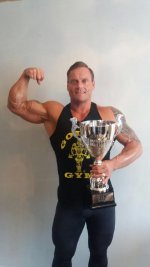 
BODYBUILDER Ken Prescott has enjoyed more success after he was named overall winner at a national competition.


And then to cap it off he was named the overall winner from all categories as well at the event which was held in Southport.


The success has seen him qualify for the European Championships, the next Mr Universe event in Brazil and Mr World which takes place in Cyprus in November.

"I was made up and winning overall was a big bonus and there were seven different classes there," said Ken, 52.


"I was first on stage and had to wait six or seven hours before I took the overall trophy. For me to win the overall at 52, I have done really well. I have got off to a good start."


The Star reported last year when Ken, a fitness instructor and personal trainer at Peak Fitness gym, enjoyed his most successful year.


He reached second in the 50-plus category of the Europeans taking home a silver medal and took part in the 10-hour Mr Universe over-50s event in Orlando, narrowly missing out on the top spot against international competition.


Dad-of-one Ken, who is married to wife Carla, added: "Hopefully I can get the big titles this year.


"I came second in the Europeans last year and hopefully I'll go one better this year."