Hey all, keep an eye open for a new Kratom forum and a new AAS forum here at mm! 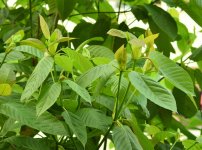 
Many of the pain pills that our doctors prescribe us can make us dopey and slow. This is because they contain one of nature’s strongest sedatives – opium. There is a healthy and safe herbal remedy for pain that gives you a jolt like a cup of coffee yet can deal with the pain you are feeling called Kratom. Drinking it could be the answer for those suffering chronic pain yet not wishing to slow down.


Many drugs given to us by our doctors are full of opiates. These are often manufactured forms of the black sticky substance found in Afghanistan poppies that is sold by ISIS and Al Qaeda to get Americans addicted and pay for terrorism. One of the effects of opiates is that it slows you down and too much can impact your ability to look after your family and go to work. In this world we just don’t have the time to be laid out flat, stoned off our faces by a painkiller that our doctor prescribed.


Many medical marijuana breeds can also leave you a bit of a mess when using it as a painkilling medication. The classic symptoms of being stoned include feeling sleepy, being unable to concentrate and not feeling very motivated. While there is no denying the amazing painkilling effects of marijuana (and that unlike prescription pain pills it isn’t addictive)the issue of demotivation and sedation is a problem that many people just can’t get past.


A preparation of kratom could well be a solution for those who seek the painkilling effects of medical marijuana or prescription pain pills without the sedation or addictive side effects. For those who have to get on with their lives, perhaps with young children or a demanding work environment, you may be seeking a pain killing medication that can allow you to face the world.


If you buy Kratom products to deal with pain yet not be delayed in your busy world, you should try out the White variety. The kratom bush is a relative of the coffee bush yet is drunk like a tea. Its effects are comparable to a strong cup of coffee yet won’t get you ‘wired’ as a triple shot Java latte would from your favourite coffee shop. While coffee just gives you a lift, kratom also kills the pain. This is the magic of the Indonesian herb.


One of the ways that kratom kills pain is through it being an anti-inflammatory not unlike ibuprofen or aspirin. Where ibuprofen can end up damaging your kidneys there is very little risk associated with long term use of this herb.


Where with prescription opiate painkillers there is a risk of overdose, kratom has an inherent safety valve – if you drink too much you will end up vomiting violently. This prevents the South East Asian herb from being a ‘drug of abuse’.


A final point to note is that kratom is not illegal. This means that you cannot be fired if you are drugs tested and it is found in your system. As such kratom may well be the wonder drug that you badly need in your cabinet!