Kurt Angle is in jail

for being a stalking pervert, DUI and possession of drugs.

According to a criminal report filed in Pittsburgh today, Kurt Angle has been arrested and is currently in the Allegheny County Jail. There was an altercation at the home of Kurt Angle involving Angle and girlfriend Trenesha Biggers, aka TNA's Rhaka Khan. Biggers went to police and filed a protection from abuse order against Angle, and police came and removed Angle from the home this morning.

At around 8AM, Biggers called police again, stating that Angle was stalking her. She had gone to a Starbucks to use the internet, and told police that Angle had her phone and had been circling the parking lot. She claimed Angle was deleting photos from the phone, which were described as "pictures of abuse".

Angle was questioned by police, under suspicion of DUI, and when they searched the vehicle, they found used syringes and two vials of HGH. Angle claimed that he had a prescription for the medication, and could provide that to police.

Angle is currently awaiting arraignment on the following charges:

Angle is scheduled to defend the TNA Title tomorrow night at the Hard Justice PPV in Orlando, Florida.
Click to expand... 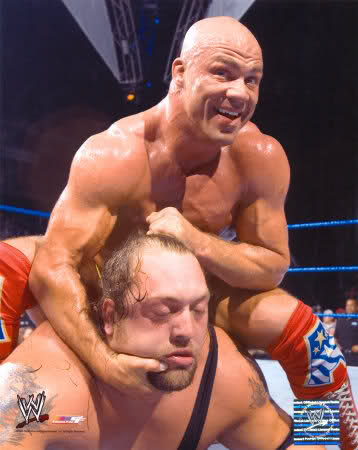