Latest On Lex Luger & How Much He Weighs Now

The Atlanta Journal-Constitution has a health update on Lex Luger, who suffered a severe spinal injury last October and had double hip replacement in February. Luger's health has gradually improved since the injury as he can now stand on his own for brief periods and uses a walker at times, although he lost his motor and finger skills, which are usually the last functions to come back from his particular injury. Luger is unable to lift a one-pound dumbbell, and is now down to 185 pounds. "I was one of the strongest guys on the planet. I was freaky strong before. I was bench-pressing 450 pounds my senior year of high school. I was a freak. Now I can't lift a one-pound dumbbell." Luger also added, "But God tells me that mind, body and spirit and what we are as a man is measured not by our physical strength, but our inner strength." Luger was released from the Shepard hospital in mid-March and now lives in a one-bedroom apartment across the street it, but is OK with it. "I've never been stronger or richer in spirit or as a man as I am right now," Luger said.
Click to expand...

Quite a shock to hear when you remember him like this 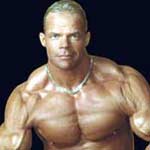 I must of been thinking of someone else, but I thought he was already dead. I also thought he had gotten arrested for beating a woman once before or something of that nature.

all i remember is that lex lugers wife OD at macho mans randy savages house.

ahhh ok thats what it was, his wife

His Wife (Miss Elizabeth) OD'ed on drugs while she was at Lex's house a few years ago. Miss Elizabeth was the former wife of macho man randy savage.

O damn. I got it mix up. It was the other way around thanks for clearing it up.

How did he get hurt?

Minchinator said:
How did he get hurt?
Click to expand...

I beleive he had a stroke