Linda Flynn plans to retire after 2021 competitions
–Paso Robles resident Linda Flynn, an International Federation of Bodybuilding and Fitness (IFBB) Masters Pro Figure competitor, will defend her title at the 2021 IFBB Pro League Pittsburgh Pro Masters on July 21-24. After receiving her pro card in 2019, Flynn plans to retire after this show, capping off a decade-long successful career inspiring people around the world in fitness, food, and bodybuilding. 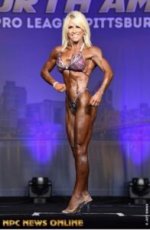 Flynn has always embraced an active lifestyle. She was an avid runner until her body changed and instead shifted to weight lifting. When people suggested she try a bodybuilding show, Flynn trained for three years in preparation and her first competition was the 2014 IFBB/NPC Tahoe Show in the Figure class.


“It’s like every year you learn more, that’s why it’s so hard to stop. You evolve and learn about how to help people or train people. You never know everything and are constantly learning. Every year I do a show, I learn more…the body is amazing,” said Flynn, noting that the stage kept pulling her back in after that first show.