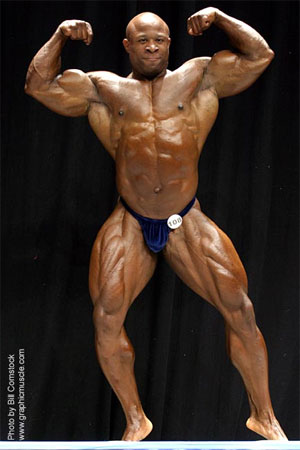 
Seems like the injury bug is biting hard these days. First Victor Martinez, now Marcus Haley, who suffered a torn quadriceps that will keep him on the sideline for most of the 2008 season.


Flex Online spoke to The Comet today, and found out that Marcus has been recuperating for three weeks now after having surgery to repair the quad on December 29.


Apparently, Marcus was in Nebraska visiting in-laws for the holidays. Haley was training legs on Christmas Eve when the unfortunate injury occurred."I was doing a set of leg extensions and went to move my body mid-rep," Haley says. "I should have known better. It sounded like a telephone book ripping as I watched the tendon retract up my leg."


Amazingly, Haley walked out of the gym and spent the next few days in Nebraska with an Ace bandage wrapped around his left quad. He saw a doctor after arriving home on December 27th and found out how serious the injury was."If you know what broom likes like, that’s what the quadriceps tendon looked like," Haley says. "I asked him to tell me now, I wanted to know if my career is over. I need to know now. He said I would come back. I’m in a spinal cast until February 7th, after which I will be put into a flexible cast and start rehab. I’ll be in rehab for six to seven weeks, but I could be back in four depending on how I respond to therapy."


The injury is the second major leg injury of Haley’s career. In 2002, Haley suffered a compound fracture of the tibia and fibula of his right leg. Haley, though, isn’t letting the injury keep him completely out of action. He started training with friend Darrell Terrell four days ago, and his weight is holding steady at 240 pounds. Haley is planning on returning to competition at the 2008 IFBB Atlantic City Pro on September 12-13 and qualifying for the 2008 IFBB Mr. Olympia for the second consecutive year.


"Pray for me, but don’t feel sorry for me," Haley says. "I’m a fighter. The Comet will rise again."

I've totaly missed this one

Anyone know how he's doing?

Man i had no idea..... Hope he recovers well and makes it back the best he can.

Heard about it some time ago, it sucks.


Interview with Marcus where he talks about the injury:

man, that would be the absolute worst thing a bodybuilder could ever go through.. even though im not a fan of his physique, i feel bad for the guy..

I hope he gets well soon.
R

That sucks for him. Hope he has a speedy recovery.

I don't like him (his physique) at all, but of course I hope that he'll recover fast.