Obama wants to control the banks

Obama Wants to Control the Banks
There's a reason he refuses to accept repayment of TARP money.

I must be naive. I really thought the administration would welcome the return of bank bailout money. Some $340 million in TARP cash flowed back this week from four small banks in Louisiana, New York, Indiana and California. This isn't much when we routinely talk in trillions, but clearly that money has not been wasted or otherwise sunk down Wall Street's black hole. So why no cheering as the cash comes back?

My answer: The government wants to control the banks, just as it now controls GM and Chrysler, and will surely control the health industry in the not-too-distant future. Keeping them TARP-stuffed is the key to control. And for this intensely political president, mere influence is not enough. The White House wants to tell 'em what to do. Control. Direct. Command.

It is not for nothing that rage has been turned on those wicked financiers. The banks are at the core of the administration's thrust: By managing the money, government can steer the whole economy even more firmly down the left fork in the road.

If the banks are forced to keep TARP cash -- which was often forced on them in the first place -- the Obama team can work its will on the financial system to unprecedented degree. That's what's happening right now.

Here's a true story first reported by my Fox News colleague Andrew Napolitano (with the names and some details obscured to prevent retaliation). Under the Bush team a prominent and profitable bank, under threat of a damaging public audit, was forced to accept less than $1 billion of TARP money. The government insisted on buying a new class of preferred stock which gave it a tiny, minority position. The money flowed to the bank. Arguably, back then, the Bush administration was acting for purely economic reasons. It wanted to recapitalize the banks to halt a financial panic.

Fast forward to today, and that same bank is begging to give the money back. The chairman offers to write a check, now, with interest. He's been sitting on the cash for months and has felt the dead hand of government threatening to run his business and dictate pay scales. He sees the writing on the wall and he wants out. But the Obama team says no, since unlike the smaller banks that gave their TARP money back, this bank is far more prominent. The bank has also been threatened with "adverse" consequences if its chairman persists. That's politics talking, not economics.

Think about it: If Rick Wagoner can be fired and compact cars can be mandated, why can't a bank with a vault full of TARP money be told where to lend? And since politics drives this administration, why can't special loans and terms be offered to favored constituents, favored industries, or even favored regions? Our prosperity has never been based on the political allocation of credit -- until now.

Which brings me to the Pay for Performance Act, just passed by the House. This is an outstanding example of class warfare. I'm an Englishman. We invented class warfare, and I know it when I see it. This legislation allows the administration to dictate pay for anyone working in any company that takes a dime of TARP money. This is a whip with which to thrash the unpopular bankers, a tool to advance the Obama administration's goal of controlling the financial system.

After 35 years in America, I never thought I would see this. I still can't quite believe we will sit by as this crisis is used to hand control of our economy over to government. But here we are, on the brink. Clearly, I have been naive.

Mr. Varney is a host on the Fox Business Channel.
R

So is he rising up your list fast or what?

haha, he still has a way to go, I think he will get there though.

(referring to my list of worst Presidents of all time. I think Obama will fall in 6-8). 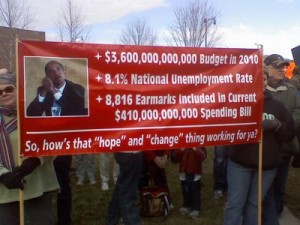 oh come on man, look at the mess thats been handed to him. u really thought he would be able to fix everything in 3-4 months?