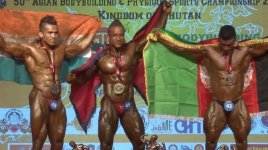 
In the program organized at the prime minister’s residence, Baluwatar, Maheshwor’s coach Gyanendra Nakarmi was also felicitated. Prime Minister Dahal felicitated them with letter of appreciation.


Maheshwor had won gold in men’s 75 kg category of the championship held in Thimpu, Bhutan in September 2016. With the gold won in the Bhutanese capital, Maheshwor had become the only Nepali player to win medal in Asian Bodybuilding.


Meanwhile on the same occasion, Minister for Youth and Sports Daljit Sripali announced to fete Maheshwor and Gyanendra with Rs 100,000 and Rs 50,000 respectively.