Powerlifters and bodybuilders have tested positive for doping: NADA

15 sportspersons including 9 powerlifters, 6 bodybuilders have tested positive for doping: NADA


As many as 15 sportspersons including nine powerlifters and six bodybuilders were tested positive for doping by the National Anti-Doping Agency (NADA)
By: FE Online | New Delhi | Published: May 24, 2017 7:34 PM


As many as 15 sportspersons including nine powerlifters and six bodybuilders were tested positive for doping by the National Anti-Doping Agency (NADA), according to a report by Republic TV. Even though the channel claimed that the list might include names of some top Indian athletes, no details were made public. Responding to the news, Union Sports minister Vijay Goel said doping will be made a criminal offence as it will send a strong message across. “Isko (doping) criminal offence banaya jayega. Hum chahte hain sakht kanoon bana kar message dein, taaki log doping karne se darein (Doping will be made a criminal offence. We want to stop it by making a strong law so that people are scared to be involved in doping),” Goel was quoted saying by news agency ANI.


Earlier in the day another field athlete was suspended by NADA for possessing banned substance meldonium leaving the Athletics Federation of India embarrassed, reported news agency PTI. The body responded by saying that it will seek the details of the incident from coaches stationed in Patiala before deciding the next course of action. NADA didn’t reveal the name of the athlete who was caught with meldonium at the National Institute of Sports in Patiala.


“The AFI is planning to call the coaches, who are stationed in NIS to find out about the incident. There will be an internal meeting to work out the way forward,” an AFI official told PTI on condition of anonymity. The suspended sportsperson can be banned for up to four years if he or she is found guilty. We conducted a search operation at NIS Patiala hostel in conjunction with SAI authorities and found the banned substance in possession of a track and field athlete,” NADA chief Navin Agarwal was quoted saying by the agency.


“This search operation was conducted last month. I cannot disclose the identity and details of the athlete and he/she has been put under provisional suspension. He/she has been given time till Monday to explain the reason for the possession of the banned substance. He will face the NADA Anti-Doping Disciplinary Panel and if found guilty will be handed a maximum ban of four years,” Agarwal added. 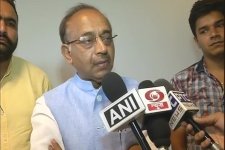