Rijiju in hot water with the IFBB 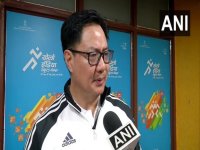 The International Federation of Bodybuilding & Fitness (IFBB) Executive Director Manuel J. Martin wrote a letter to Union Minister for Youth Affairs and Sports Kiren Rijiju informing the latter regarding serious violations of the World Anti-Doping Code (WADA) code in India. In the letter, Martin wrote that an American private company is intending to do business in India with rules that are against anti-doping.

"The International Federation of Bodybuilding & Fitness (IFBB) would like to bring to your attention the fact that an American private company, without any sport recognition, is intending to do business in your country through the organization, promotion and sponsorship of a championship in the area of Bodybuilding & Fitness which, being out of the rules against anti-doping in sport and representing therefore a serious threat to public health," Martin said in the letter. The letter further stated that the company is intending to organise a bodybuilding event which is totally against World Anti-Doping Code (the WADA Code) in Chandigarh on March 1.

"They are intending to organize a bodybuilding event outside any sport regulation and totally against the World Anti-Doping Code (the WADA Code). The event is scheduled to be held in Chandigarh (Tagore Theatre) under the name "Sheru Classic" on March 1, 2020, and its promoter will be an Indian citizen named Sheru Angrish. It is important to emphasize that this is not a tourism or travelling promotion event but a private sporting event with the sole aim for their organisers to make profits," the letter further read. Martin said the company is linked to an organization headed by Jim Manion, an American citizen who was subjected to investigation by the IFBB and found guilty of allowing athletes suspended for anti-doping rule violations to compete at his events.

Manion was and is still suspended and included from January 2018 until October 2025 in the 84th position on the List of Prohibited Association by the WADA. The sanction on Manion does not allow him to be related to any sports organization or event during the period of ineligibility, according to the rules of the WADA Code. In the letter, Martin said bodybuilding is a very popular activity in India and hoping that the Indian Government will take necessary actions.

"Being the sport of bodybuilding and fitness a very popular activity and life-style among youngsters in India and in the trust of the firm commitment of the Indian Government with the promotion and defense of public health -not only because of its public behavior in this sense, but also because of its adoption of the WADA Code by ratifying the UNESCO Convention (Copenhagen Declaration on Anti-Doping in Sport of 3 March 2003)- we are sure that you will take the necessary actions that you may consider accordingly with your national laws and jurisdiction against doping and doping engagement activities in order to not allow such company to develop this championship in your country," the letter read.