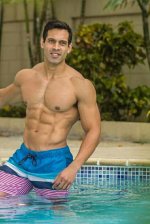 Just nine days after celebrating his 36th birthday, actor and bodybuilder Brett Bengochea has died. Brett Bengochea is known for his work on Trafficked (2015), A Story About Wendy 2 (2014) and Girlfriends' Getaway (2014).


Bengochea, known for his role in local movie Trafficked and A Story about Wendy 2, drowned at Balandra beach, Toco, on Saturday.


Police said Bengochea was swimming with friends when he encountered difficulties and went under the rough waters.


He died shortly after being pulled from the water.


Bengochea, a father of two, was the 2015 National Junior Men's Physique Champion.


He was remembered by friends as a young, strong, talented man.

---
The local bodybuilding fraternity was plunged into mourning on Saturday following the news of the death of the rising bodybuilding talent Brett Bengochea. The 36-year-old drowned while bathing with friends at Balandra beach on Saturday afternoon.


It is understood that Bengochea got into difficulties and went under water. Suzanna Hadad, the local bodybuilding federation president said his body was fished out of the water and desperate attempts were made to resuscitate him as he was being taken to the nearby Toco Health Facility.


Hadad described his death as a huge blow to her federation and the sport, saying he had so much talent and promise in the sport.


“We are still trying to come to terms with the fact that he has really died. He was such a good person and trainer who was always pleasant to everyone he met,” Hadad said.


Members of bodybuilding federation and the fraternity were expected to attend a wake at his Tacarigua home last night. Bengochea came on the scene in 2015 and made an almost immediate impact by winning the Junior Nationals and the overall title in his class, before quickly progressing to the seniors where he contested the Central American and Caribbean (CAC) Body Building and Physique Championship in the Dominican Republic last year and placed fifth in the Men’s Physique C Class.


According to Hadad, “Bengochea was what you called a newcomer to the sport but he had so much potential.” Bengochea was on a shortlist of 30 bodybuilders to compete at this year’s CAC tournament in Mexico City in September, Hadad said, noting that the top six athletes from each category were chosen from last year’s CAC competition.


In addition to his achievements in bodybuilding, Bengochea was also an actor whose role as Alejandro in Sean Hodgkinson’s local film ‘Traffiked’ has brought him much fame and publicity in the industry.