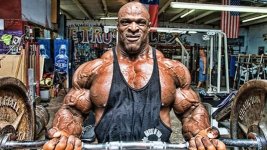 Ronnie Coleman, born in the year of 1964, is one of the famous professional bodybuilders in the whole world and an expert in his field. A native of Louisiana, he is known for his numerous wins in many famous bodybuilding competitions all over the world. Other than his interest in bodybuilding, Mr. Coleman has an interest in football and is a dedicated police officer. He is an inspiration for all bodybuilders who love to spend time to build their body. His videos are very famous throughout the globe.

Education
Ronnie Coleman completed his graduation in the year of 1982 from high school. After his graduation he received his Bachelors degree from Grambling University in the year of 1986 in Accounting. Coleman didn’t marginalize his education only in adapting degrees, but also he had a keen interest in various other things such as football. He took part in the football team under the supervision of his coach Eddie Robinson at Grambling State University.

Career
Mr. Coleman chose his career to be a police officer after his college. He joined as a police officer of the Arlington police section. His passion for bodybuilding, made his life glorified. He took body building as his priority and showered his all interests to make it successful. Ronnie, the spectacular body builder showed the world about the art of bodybuilding and its techniques.

Titles
He proved himself to be one of the best body building professional in this field by winning over many other opponents, which was not only a tough matter but also a journey through hardship. He defeated his own trainer, Mr. Dobson who introduced him to the world of bodybuilding in the event for the title of Mr. Texas. Ronnie Coleman won the heavyweight and overall categories. In the year of 1995, Coleman won his opening contest in Canada Pro Cup and later again in the year of 1997, he won The Russian Grand Pix.
Ronnie was introduced to the whole world by his body building profession through which he got many opportunities to travel many places like Brazil, China, Australia, and many more. He became one of the most honorable guests for gyms in the USA. He inspired lots of people to become like him. He is still an inspiration for plenty. He is one of the most respected personalities in America and hence because of this he has been invited to plenty of gym opening ceremonies across the United State.
He upgraded his career through thick and thin and manifested himself to be the best body building professional. He made various training videos which helped lots of upcoming body builders, how they should follow to make a remarkable body and its method. Anyone can follow these videos by Coleman and make body like him. However before you perform all those tips and suggestion to build the body, it is advisable that you consult with any expert fitness trainer to know that you suppose to do exactly.

Fitness videos
Coleman introduced his videos for the welfare of the lifters, maintaining and also warning about overexertion and improper form of body building. His famous videos like The Road, The Cost of Redemption and The Unbelieving, contain tips about the method of body building and its all steps and as well as teaches not to take too much of stress which can damage one’s body and mind.
In these videos, Coleman teaches simple and easy steps that can be performed by upcoming body builders to make a body like him. CDs and DVDs of his videos can easily be purchased from any reputed store that deals with bodybuilding accessories. One can even go online to purchase these videos. Make sure that you purchase a genuine video to learn the skills and earn the fame like Mr. Ronnie. However if you are looking to save money and still want to watch his videos, you can go online and search his videos by above mentioned names.

Follow the Ronnie’s unique methods:
Ronnie, in his professional journey in body building always inspires to have trained under free-weights rather than weight machines. He was keen to exercise with light weights for rising up his own flexibility and gearing up his body motions. His method of training was a little different, because he believed that flexibility can be gathered through light weights, not only machines. His way of body building is really effective and suitable for any upcoming