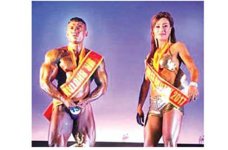 
Sangay Tsheltrium, 34, and Damcho Zam, 32, won the titles of Mr and Ms Bhutan 2017 at the ninth National Bodybuilding Championship, which was held on June 10 at the Lugar theatre in Thimphu.


Sangay Tsheltrim, who weighed the most at 96kgs, beat 12 others to take home the gold while Damcho Zam, who had participated in several international competitions, was declared Miss Fitness Bhutan 2017.


Of the 16 contestants in the championship this year, three were women. Most contestants were new faces.


Mr Bhutan Sangay Tsheltrium said that for those pursuing bodybuilding and fitness sports, it should not just be a profession but passion.


He encourages youth to take up the sport as it promotes good health and happy living.


“Bodybuilding and fitness training include discipline, time management and motivation. It keeps youth away from unnecessary issues,” he said. “The sport gives us enormous opportunities in promotion and employment for youth.”


Miss Fitness Bhutan Damcho Zam said that fitness training requires a lot of support from everyone.


“This amazing achievement of mine is because I have a strong belief and support from my family,” she said. “We need to pursue fitness as a lifestyle. It keeps us healthy and strong both mentally and physically.”


Although volunteers run the federation, the championship continues to be one of the most awaited annual events. It is held annually to promote and encourage youth in bodybuilding and create awareness on fitness. The event’s objective is also to initiate and disseminate knowledge on good health and physical development. The event marks the biggest weekend of the year for bodybuilders and fitness competitors across the nation.


Bhutan Bodybuilding and Weight Lifting Federation General Secretary, Tashi Lhendup said the federation has contributed towards employment for youth since last year. Several youth are employed as trainers in gyms.


However, this championship had the least number of contestants. Organisers said the past winners and contestants had not participated as they had been into bigger events last year.


This is a common practice among bodybuilders where they take breaks from competitions for health reasons. However, the federation expects more to participate in future.