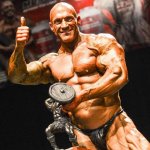 A MAN has been convicted of killing Mr Scotland bodybuilding champion Michael O’Hanlon.


Steven Kirkwood, 44, stabbed Mr O’Hanlon four times in the office of HK Autotek garage in Stevenston, Ayrshire, on July 25 last year. His victim died from massive blood loss.
He was originallycharged with murder but the jury at the High Court in Glasgow unanimously convicted him of the reduced charge of culpable homicide under provocation. Kirkwood claimed he had acted in self-defence after being assaulted by Mr O’Hanlon, 45, from Irvine, and his friend Forbes Cowan, 52, a former competitor in the World’s Strongest Man contest.
Judge Lady Rae said: “This is a very serious offence, although it has been reduced to culpable homicide, ... particularly in view of his record for violence and the degree of violence that was occasioned in this particular case.” Lady Rae ordered a background report and an assessment of the risk Kirkwood poses to the public.


Kirkwood had issued a Facebook challenge to Mr O’Hanlon, saying: “Feel free to come to Hammy’s and see me. I will be there at 12 today.” The court heard that Kirkwood’s ex-partner Eileen Kirkwood and was in a relationship with Mr O’Hanlon planned to marry last August15, last year.


Garage owner Ian Hamilton, 40, from Saltcoats, told the court he saw Kirkwood with a knife and added: “It was a large Bowie-type knife with a six- to eight-inch blade with a bright coloured handle. A ‘Rambo’, serrated on one side.”


Kirkwood denied taking the knife with him and claimed he had picked it up from the floor in the garageas he was being assaulted by Mr O’Hanlon and Mr Cowan.
Prosecutor Richard Goddard said: “Mr Kirkwood has an extensive record for violence and for carrying weapons. At the time of the offence he was on two bail orders for road traffic offences and under the Police and Fire Reform Act.”


Sentence was deferred on Kirkwood until next month. He showed no emotion as he was led away.