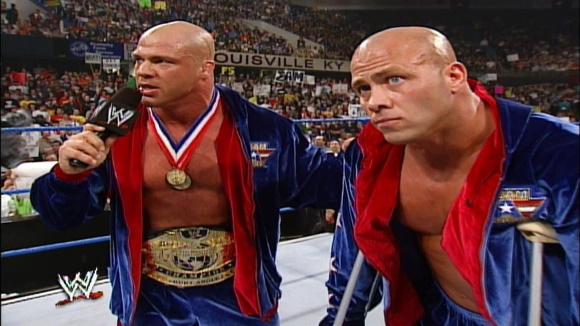 Three men have pleaded guilty for their respective roles in manufacturing and distributing anabolic steroids under the brand name UX Labs.
Kurt Angle’s older brother Eric was one of the three men who admitting selling UX Labs branded anabolic steroids. Ronald Roginsky, John Ambrose and Eric Angle each pleaded guilty at the U.S. District Court in Cleveland on January 6, 2020.
Roginsky was identified as the leader of the UX Labs team. He admitted to starting the underground laboratory where he manufactured UX Labs products. Roginsky started off selling UX Labs steroids on bodybuilding forums. He later partnered with Ambrose to sell steroids on darknet marketplaces such as AlphaBay, Dream Market and Wall Street under the username “qu4ntum”.
Angle had the smallest role in the operation. He was merely an independent distributor of UX Labs products. Angle admitted purchasing 721 grams of liquid steroids from Roginsky for redistribution.
Roginsky pleaded guilty to conspiracy to distribute controlled substances (anabolic steroids) and money laundering. Ambrose and Angle only pleaded guilty to the former charge.

Eric Angle was a former World Wrestling Entertainment (WWE) developmental talent who briefly worked alongside his much more famous brother Kurt.
Kurt was an Olympic gold medalist in freestyle wrestling at the 1996 Atlanta Olympics. Kurt later became a star performer with the WWE. He was inducted to the WWE Hall of Fame in 2017.
Eric Angle’s legal woes and potential prison time add to the long list of misfortune experienced by the Angle family. Their father was killed in a tragic work-related crane accident in 1985. Kurt’s coach and friend was murdered by millionaire benefactor John Eleuthère du Pont in 1996. Their sister died of a heroin overdose in 2003. Their mother died after a long battle with breast cancer in 2015. Their brother David was sentenced to prison after killing his wife during a drunken argument in 2015.
And now, Eric could very well go to prison for dealing steroids. He is scheduled to appear before U.S. District Judge James Gwin for sentencing in April 2020.