This bodybuilder is 72 and kicking ass.

You guys think you have challenges? This bodybuilder is 72 and going strong. You can do it. 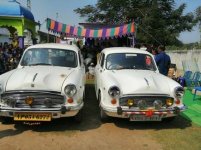 Two cars being stopped by Peddi Lakshminarayana in Vizianagaram on Monday.

A 72-year-old man, Peddi Lakshminarayana, who is being called as ‘Abhinava Bhima’ proved his fitness and talent by stopping two running cars with full acceleration for three minutes.

His stunt was organized by Kodi Ramamurthy Memorial Society in Vizianagaram on Monday.

Mr. Lakshminarayana has earlier proved his mettle by allowing elephant to put his foot on his chest.

Mr. Lakshminarayana has earlier proved his mettle by allowing elephant to put his foot on his chest.

Mr. Lakshminarayana said that he wanted to convey the message that age should not be a barrier for physical fitness, a must for everyone to lead happy and healthy life.

Vizianagaram Telaga Samskshema Sangham president Pallanta Venkata Rama Rao, chief guest of the programme, said the feat inspired many. He recalled the greatness of Kodi Ramamurthy (1882-1942) who had brought laurels to India in bodybuilding and wrestling.

He assured budding wrestlers that wrestling competitions for young bodybuilders of North Andhra region will be conducted to continue the legacy of Kodi Ramamurthy.