UFC Champion Jon Jones has been stripped of a UFC title for the third time!

Jon Jones tested positive again for a banned substance and has been stripped of the title again. It is the third time! Dam Jon... 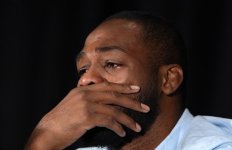 From the Inquisitr by Frank Yemi

Former UFC light heavyweight champion Jon Jones has been stripped of a UFC title for the third time after testing positive for a banned steroid. After his B sample came back positive, fans and members of the MMA community pondered whether ‘Bones’ Jones took the steroid knowingly and how he could have taken the banned substance.


Turinabol, the steroid Jones tested positive for, has shown up on several supplements in the USADA high-risk list. Therefore, it is possible that Jones took a supplement that was tainted with the steroid.


Current UFC light heavyweight champion Daniel Cormier told Ariel Helwani that he takes several supplements and has never tested positive and thus wonders how his rival keeps failing drug tests. Jon Jones has denied taking steroids on Twitter since the news broke out and he will likely come up with a defense when he faces the athletic commission.


Former UFC champion Chuck Liddell suspects that Jones started using performance-enhancing drugs when he was bodybuilding during his one-year ban. Jon Jones went through a physical transformation building a lot of muscle in a short period of time.


In 2013, new testing methods were developed to help detect metabolites of turinabol for several months after ingesting the drug. Some theories suggest that the people advising Jones to use the steroid were not aware of this development in detection methods.

Miesha Tate recently stated that ignorance is not an excuse. “You’re either clean or you’re not. There is no gray zone when it comes to full contact sports, period,” Tate told MMA Tonight on Sirius XM, according to Bloody Elbow.


Tate went on to reveal that USADA provides athletes with a plethora of information and UFC athletes have an opportunity to cross-check whether supplements they use are safe for consumption or not. Turinabol is a popular steroid among athletes and one of its effects is improving strength.

Jon Jones UFC 214 victory was changed to a no contest because it is unclear whether he could have achieved the knockout victory without the performance enhancer.


Many analysts suggest that if Jones took the steroid knowingly, it will likely be through an oral supplement.


It is yet to be determined how the banned substance was ingested by Jon Jones. He will likely receive a punishment regardless of whether it was intentional or not.

Jon Jones has once again tested positive for a UFC illegal drug. And while Jon Jones still denies it despite two separate tests proving him guilty - it looks pretty obvious that this will remain another blotch on the mega fighter's career. But exactly what is turinabol and why would Jon Jones risk his career by taking it before his big fight? Jerry Brainum breaks down the facts behind this oral steroid, what it does, and why Jon Jones might have wanted to use it before his big fight. We might never really know what happened or why Jon Jones used turinabol - but this breakdown might help us all get a little bit closer to the truth. Get the Straight Facts in our episode above!