Don't fuck with the US Marines and that includes bodybuilding! 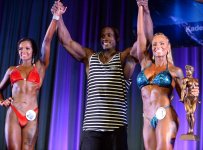 KADENA AIR BASE, Okinawa — For Kenneth Walker, it was a long time coming.


The 41-year-old former Marine, who last won an on-base bodybuilding championship on Okinawa six years ago, captured the overall men’s title in the 11th Pacific Muscle Classic on Sunday at Kadena’s Keystone Theater.


“It’s been awhile,” said Walker, who took top prize at the Far East Bodybuilding Championship at nearby Camp Foster in 2011. “I’ve been waiting for this. It feels good to be back on top.”

About 350 spectators turned out for the 2-hour, 15-minute competition, which featured nine competitors in the women’s figures division and 14 in the six men’s bodybuilding categories. There was also a brief presentation by guest poser Robert Timms, a staff sergeant and pro bodybuilding competitor assigned to Luke Air Force Base near Phoenix.


Walker, a native of Paterson, N.J., who works for the Exchange at Camp Hansen, also won the men’s masters — 40 and older — category. The former Okinawa Marine got out in 2001 as a staff sergeant.


The women’s overall title went to Christine McGown, 36, of Rivervale, N.J., a civil servant on Okinawa who also served in the Marines; she got out as a sergeant in 2001. McGown also won the women’s figures short — under 5-foot-4 — category. 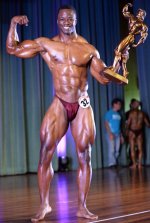