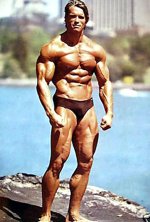 By the way, I'm writing this in June of 2007. Did you know the Terminator...er...Mr. Governor of California, erstwhile "Conan the Barbarian", is turning 60 this year? I've never really looked into his history before, but it fascinates me. It's not so much WHAT has happened to Arnold Schwarzenegger over the years, as HOW it happened. You see, to me, Arnold Schwarzenegger, the kid from Austria (I'm two years older, so he's a kid), typifies what the term "American Dream" means. He also demonstrates all those things the motivational specialists talk about. He's almost a living textbook for goal setting, motivation, and achievement.

Arnold Schwarzenegger was born on July 30, 1947, in the small Austrian town of Thal. Had he not had a dream, he might have followed in his father's footsteps and eventually become the chief of police in Graz, Austria. Fortunately, he was encouraged by his father, Gustav, to participate in sports, and his older brother, Meinhard, gave him a playmate and role model. Actually, things could have turned out differently, as Meinhard was more naturally athletic than Arnold. However, it was Arnold who had the dream, and that's what made everything else happen.

At one point in his teen years, you probably would not have been able to picture the future Commando, John Matrix, in the six foot tall, 150 pound Austrian kid. On the other hand, his commando raid on the gym at Graz's soccer stadium, where he and his friends broke windows so that they could get in and work out, might have been a clue. In movies like Predator and Commando, he endured suffering and hardship, but he started getting his taste of that when he had to exercise in a gym sometimes so cold that he still recalls his hands sticking to the chinning bar.

It takes a lot of dedication to a dream for a kid from the sticks of Austria to stay with a dream of becoming the world's best bodybuilder...and an actor...and the Governor of California...but he did.

As with many successful lives, a lot of luck figured into Arnold's success, but through it all runs a common thread. He knew what he wanted, and he was willing to do what was necessary to get it. In another commando-like move, the 20 year-old tank driver even deserted from the Austrian army for a few days and slipped into Germany so that he could compete in, and win, the Junior Mr. Europe event in Stuttgart. Oh, by the way; upon his return to Austria, he was caught and spent 7 days in jail, but when the word of his win got around, he became a hero to the Austrian army and was held up as a model of courage and tenacity.

In an interview in 2006, Tom Venuto, natural bodybuilder, fitness coach, author of "Burn the Fat. Feed the Muscle", and co-author of "Fit Over 40", was asked what he thought was "the one thing most needed to change a person's lifestyle and improve their health."

"A committed decision to reach a predetermined specific goal, combined with burning desire, followed by immediate, massive action repeated consistently for as long as it takes until your goal is reached."

Looks like the mantra that Arnold Schwarzenegger might have chanted on his way to becoming Mr. Olympia (7 times), a Hollywood actor (43 movies), the husband of Maria Shriver (Kennedys - lots of 'em), and current occupant of the California Governor's mansion, doesn't it?

Well, if you could look at the Arnold Schwarzenegger history story with glasses that allowed you to see behind the scenes, you would regularly see one "predetermined specific goal, combined with a burning desire" after another. You would see a man who realized that to reach each goal, he would have to take "immediate, massive action repeated consistently for as long as it takes" to reach each goal.

Sounds like perseverance is a major issue of success once you have set your goal!

Even good ol' P. T. Barnum, another, slightly different proponent of the American Dream, and perhaps best known for the Ringling Brothers, Barnum and Bailey Circus, had this to say in his classic essay, "The Art of Money Getting or Golden Rules for Making Money":

"How many have almost reached the goal of their ambition, but, losing faith in themselves, have relaxed their energies, and the golden prize has been lost forever."

Time and again, people like Napoleon Hill, author of "Think and Grow Rich", have extolled the virtue of being willing to stick to the path through thick and thin, once you know what the goal is.

It's not dates and events that make up the Arnold Schwarzenegger history, or his version of the American dream. It has been his willingness to pursue his dreams and goals through all sorts of obstacles, and in spite of a multitude of naysayers, that has taken him to where he sits today. It is this willingness to pursue the American dream wholeheartedly that in earlier eras was the subject of so many fictional and non-fictional books alike.

Today, there is a vast market in self-help and self-improvement products. All sorts of programs and processes are offered for consideration of those wanting a piece of the American Dream. However, again and again, once the overlay of words and technique is stripped away, the setting of goals, and the constant, unrelenting striving to achieve those goals is at the heart of almost all true success stories.

Maybe it takes a one-time hick from a small town in Austria to remind us of what we keep saying we have, or want, or wish was still available to an ordinary person in America. Maybe, as at least one article has stated, "Arnold Schwarzenegger is the definition of the American Dream."

You must log in or register to reply here.
Similar threads